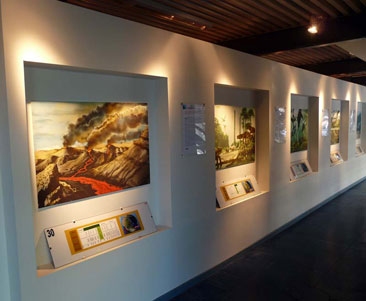 Showcase in the first floor of the museum.

The story begins with a group of people who saw the need to create a space for research in the area of ​​Natural Science in all disciplines: palaeontology, biology, zoology, geology, botany, agronomy, and more.

The founders created this space because of the absence of knowledge by the public about the nature around us and the possibilities it gives us. In this sense the Museum through its research, education and outreach is shaped as a fundamental support in this task.

The museum is the ideal vehicle for the dissemination of knowledge. It has a staff of scientists and young technicians that in a fresh way transmit that knowledge for the enrichment of the community that hosts them.

Patagonian Fundation of Natural Sciences was founded in 2002 by initiative of a group who had collections and particularly wanted to canalize what they had. In 2006, the government of the province of Río Negro decided to give the building of the former Banco Provincia, for installation of the Museum. Subsequently, available through the Act No. 4077 was created the museum as a provincial institution, making the dream finally come true and officially opened in early 2008. 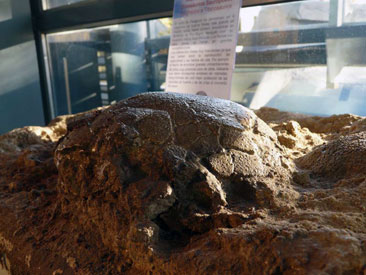 The creation of the museum served to give institutional support to research activities, research, outreach, awareness and conservation of natural and cultural heritage of the region.

Thus began having as capital grants only the first members of the Foundation brought to the museum, but was increased progressively with the results of successful  paleontological campaigns and the fossils that were found.

The aim of the Foundation is to strengthen the museum as a dynamic center where you can meet, study, research and spend time at their facilities. It has a conference room, bar, laboratories and a library to be launched next.

The Patagonian Museum of Natural Sciences is located in a large, modern three-storey building, situated in the center of General Roca in Roca Avenue 1,250.

It opens the doors to the public Wednesday to Saturday from 9am to 12pm and 5pm to 9pm and Sunday 3pm to 10pm. Guided tours by request shifts. In addition, the space is rented out for events in the auditorium. 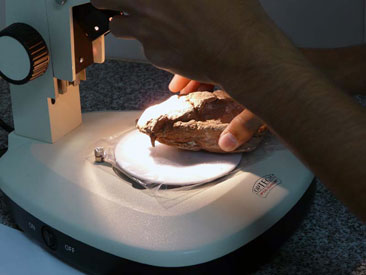 One of the main activities in the museum is research.

In the museum entrance is the reception and merchandising hall and a small store of handicraft market in the province of Río Negro. Upstairs you can see a complete and modern educational trail, Paleontology, Geology and Mineralogy. In the tour around the Museum you can learn what a fossil is, how is the process of fossilization and also what materials fossilize. You can algo know about rocks and minerals of our region, which experts say are the best in the country.

The Patagonia Natural Science Foundation plans to build a scene where to recreat the Río Negro's Cretaceous environment with dinosaurs in size. In this project we are working on a group of artists called the "paleoartists" that are recreating among others, a dinosaur of 10 meters, "Platasaurus", a herbivore that lived in Patagonia. This is part of the second stage of implementation of the museum, which is covered to make:

At the same time there is an area designed for different activities of high cultural level and other educational programs organized by the Museum (as the "Paleontologists for a day" program). In the second floor is a large space for image galleries, the auditorium fully equipped for sixty people and theme bar (with a lovely view of the city). 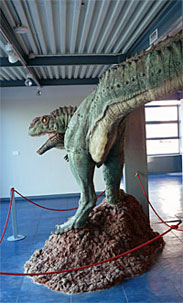 On the ground floor of the museum is the Director and the Secretariat, the public bathrooms and laboratories.

In the Laboratory of Earth Sciences they are working on the restoration and preparation of paleontological material for the museum, both for study and for exhibition, to be a very important contribution to the province in relation to heritage preservation.

The other is the Biodiversity lab in which they are working in entomology (insects preparation and cataloged) and micro-mammals of the province of Río Negro, through an agreement between the Foundation and the Department of Wildlife in the province of Río Negro. They are conducting studies on pellets (balls made ​​of remnants of undigested food that some birds regurgitate, and that their study can not only determine the type of food they carried, but also a comprehensive census of small vertebrates that ingest).