To say that this land was inhabited by dinosaurs is no discovery, nor is the fact that in Patagonia have found many of their remains. What we do is new, is the discovery of 5 hectares of fossilized remains of dinosaurs in the Department of "El Cuy" in the province of Río Negro. That is a discovery! 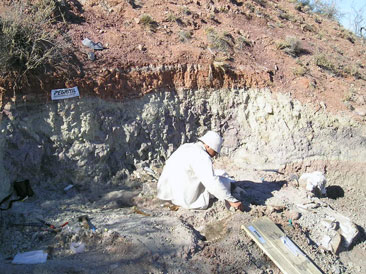 Since 2005 was found El Cuy, south of General Roca, which seems to have been a catastrophic event that left a deposit of bones comparable only to a cemetery. In the area of ​​discovery, are working members of the Patagonian Foundation of Natural Sciences, in conjunction with the Pangea Network (Consortium of Italian Naturalistic Museums).

There were found fossils of what they call "Titanosaurs" and that in total reach to 16 individuals of this species. They have also found remains of three carnivores, in addition to the remains of turtles, fish and plants that help us understand the "Palaeoenvironment" where these animals lived.

There are 18 scientists, including paleontologists and technicians working at the sun and shade cleaning each piece and trying to reconstruct what life was like for these animals that lived millions of years ago.

Pablo Chafrat is a member of the Patagonian Natural Science Fundation and is working on the site since the day of discovery. He stated that with this finding will be possible 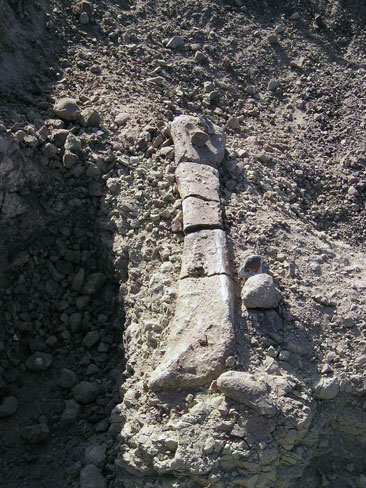 The fossils emerge from Patagonian ground.

Patagonia is considered one of the largest reservoirs of fossils in the world, given its high potential for the discovery and the creation of new areas of natural and paleontological  heritage conservation. An example of this is what is happening in El Cuy.

Pablo Chafrat says that there are functions performed by the discovery that researchers are respecting and taking into account, including:

"The rescue of the natural heritage of the province of Río Negro, the possibility of research on partnerships with the dinosaur fauna that lived in the Cretaceous and most of all become aware of the importance of maintaining our fields unchanged, so that from Río Negro's museums can continue researching and rescuing our past", said Chafrat.

An obvious question was to know whats going to happen with these dinosaur remains, as there are eyes of all over the world about this mine of fossils. At this Chafrat explained that

"Paleontological materials are our natural and cultural heritage, it is fitting that these materials are prepared, studied and shown here in General Roca. This is the heritage of the province and must be preserved as best as possible. This natural event is very rich for science and education of this region, Argentina and the world". 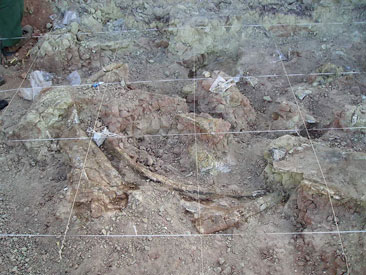 New fossils discovery in an excavation.

About this phenomenon, yet there is no scientific explanation stating what occurred in this area about 87 million years ago. Hypotheses talk of a flood or a landslide, which resulted in this great accumulation of bones.

The tasks in this field have a beginning but not an end in sight, it is assumed that there are still many more bones. It is a task of years of studying and researching to know how they lived and behaved these creatures of the Cretaceous.

One of the fossils being recovered is the skeleton of a Laplatasaurus, nearly 10 meters. We also found a juvenile of these sauropods, the largest herbivores of that record. Moreover one of the first discoveries in this area was the Abelisaurus, which is currently showing at the Patagonian Museum of Natural Sciences.