Ninquihue Social Project for the children of the streets See map

A project in General Roca, Río Negro is trying to take out little by little children of this area from the street. This is not just give them shelter and food, but also provide the tools to be inserted differently in society. Thus, children have the opportunity to train, work in gardens, study and learn time discipline, among other things, with very encouraging results: the majority of addicts, criminals and marginal has to leave his addiction, discard criminal behavior and search a steady job, respectively. 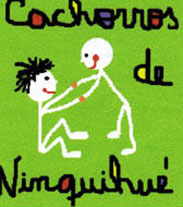 The project is carried out by a group of various organizations.

Throughout the following headings there are details of the project that works with a group of about 100 children and young people.

In seeking to develop alternatives to restraint and social promotion of children on the streets, there has been a permanent job in the various places where children gather. Every day a group of volunteers assists with food (lunch or dinner) and biuld the emotional base needed to implement the best strategy for each case.

They make contact with other institutions that have intervened in the family situation. Where possible they try to reinforce the existing social and family links. Recreational activities are performed, they are legal counsel and with conflicts with the police. In addition to the sustained presence of street traders, there is a group of families making food at home for dinner on the street. Since it has been lived the process they achieved an open dialogue and a recognition of the work by the police of Río Negro.

There are between 8 and 10 youths living in the shelter and a larger number attends during the day (from lunch to dinner). It's the end of a stage with each beneficiary (only work on the street) and the beginning of a new stage. The will to initiate a process of change and personal growth is required. They work from a participatory group experience, with 9 teachers and technical staff that accompany and motivate the development of proposed educational objectives, but the protagonists are the beneficiaries themselves.

The most important achievements are related to the acquisition of skills for the development of everyday life, ownership and care of the space (for them the refuge is "La Casita"), growth in self-care attitudes and participation daily in the organization of the house (cooking, cleaning, laundry, and more). Another major achievement is the possibility of structuring the day schedules and activities (tutoring, workshops on pottery and crafts, work in the garden, sports training, and more).

65% of youth served who lived at the refuge have left the state of vulnerability in which they were and are directed in their own life projects (they have logged into their own home or live with their parents or in-laws and generally have stable job). 80% of young people who have addictive behaviors has stopped consuming. The same percentage was achieved in those with criminal behavior. Of the remaining 35%, 50% is still in the process of growth.

On November 1, 1998 was put into operation Ninquihue Bakery, based on steps taken and help received.

National Apple Festival 2Each february General Roca lives a new edition of the already famous National Apple Festival.
The irrigation channel and its parks The secondary irrigation canal runs through the center of General Roca, and the squares on its banks are the perfect site for hiking, hanging out with friends or just having a moment of relaxation.
Vuelta de la Manzana Rally "Vuelta de la Manzana" Rally is organize every year by the Drivers Association of General Roca (AVGR). Is one of the most important automotive events in Patagonia and in Argentina.
Museums in General Roca There are many museums in General Roca. They are good places to learn about history and art of the city.
Through the Negro River shores Throughout the coastal area of ​​Negro River there are places of great beauty for camping, water sports, fishing or recreation
Paragliding in General Roca, a look from the sky 3There are several people who practice paragliding in the hills near General Roca. Also you can take courses.
Night trekking: walking by the light of the moon in General Roca 3The night trekking in General Roca takes place once a month, when the moon is full, and is part of the "adventure ecotourism" project, offered by the city.
Casa de Piedra: a weekend option from General Roca The reservoir Casa de Piedra is located on the border between the provinces of La Pampa and Río Negro, along the Colorado River and 110 kilometers from General Roca. Ideal for a weekend of resting.
The apple route A tourist circuit to learn about fruit production, the colorful surroundings of General Roca and its history through visits to barns, farms, wineries, museums and monuments.
Patagonian Museum of Natural Science The Patagonian Museum of Natural Science in General Roca is a place where you can learn about the dinosaurs of Patagonia.
See all Articles