Wheels Association of General Roca (AVGR) organizes every year one of the most important automotive events in the country the "Vuelta de la manzana" Rally, which involved about 80 regional and national competitors. 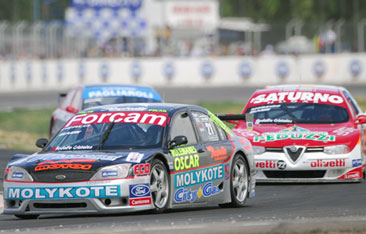 Competitors of all the country come to participate of the "Vuelta de la Manzana" Rally.

"Vuelta de la manzana"  is so named because of the fruit that represents General Roca. The AVGR decided to give this name to represent General Roca and what its doing because this is a traditional tour of major national and international levels.

Since 1963 the Wheels Association of General Roca is working with the firm objective of its founding: to support racing and motorcycling.

"Vuelta de la Manzana" is one of the most significant events nationwide. In addition to the strictly sporting, is important for the call that has national and international sports fans, journalists and general public enjoys seeing this type of events that, we see a show of lights and colors combined with the roar of the engines thar is begin to feel.

National Apple Festival 2Each february General Roca lives a new edition of the already famous National Apple Festival.
The irrigation channel and its parks The secondary irrigation canal runs through the center of General Roca, and the squares on its banks are the perfect site for hiking, hanging out with friends or just having a moment of relaxation.
Museums in General Roca There are many museums in General Roca. They are good places to learn about history and art of the city.
Through the Negro River shores Throughout the coastal area of ​​Negro River there are places of great beauty for camping, water sports, fishing or recreation
Ninquihue Social Project for the children of the streets Project Ninquihue of General Roca is a project for the kids in the street. It tries to give them containment and a new way of living. In this project many institutions of the city and province join efforts.
Paragliding in General Roca, a look from the sky 3There are several people who practice paragliding in the hills near General Roca. Also you can take courses.
Night trekking: walking by the light of the moon in General Roca 3The night trekking in General Roca takes place once a month, when the moon is full, and is part of the "adventure ecotourism" project, offered by the city.
Casa de Piedra: a weekend option from General Roca The reservoir Casa de Piedra is located on the border between the provinces of La Pampa and Río Negro, along the Colorado River and 110 kilometers from General Roca. Ideal for a weekend of resting.
The apple route A tourist circuit to learn about fruit production, the colorful surroundings of General Roca and its history through visits to barns, farms, wineries, museums and monuments.
Patagonian Museum of Natural Science The Patagonian Museum of Natural Science in General Roca is a place where you can learn about the dinosaurs of Patagonia.
See all Articles