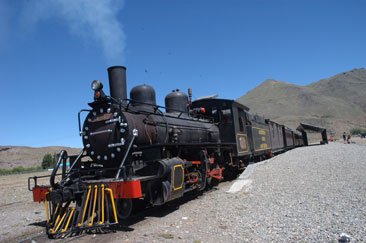 The trip by La Trochita, a return to the beginning of the century.

Train fans around the world flock to this corner of the south, in Chubut, to find a gem of Argentinean tourism: La Trochita or Viejo Expreso Patagónico (as it is known in the international travel agencies). A train that is a real museum walking because its estrucutura and rails on which flows are a relic.

But not only the machine itself is attractive and stands out from other trains in the world. Its value added is the landscape where it goes. La Trochita's vapor dissipates in the clear Patagonean sky. Its rare wooden wagon wheels by a very narrow trail on a steppe covered in wildflowers and there, walking, it losts between the imposing mountain range of Chubut. Finally, it seems a little train toy moved by the imaginative mind of a child.

The tour of this famous tourist train is done from Esquel to Nahuel Pan stations in a convoy pulled by locomotive. Its tiny size cars and its particular narrow gauge make it one of the few that survive the test of time. 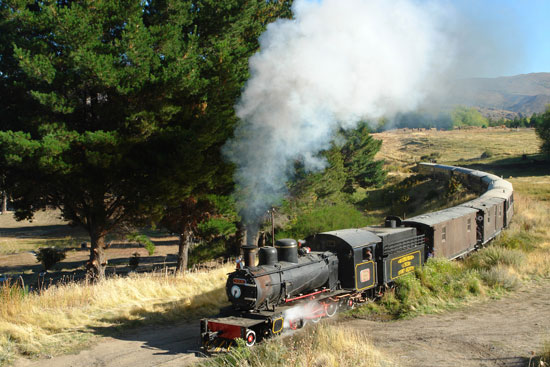 From Esquel, you undertake a winding path of changing geography. After walking a few kilometers you arrive at the town of Nahuel Pan, where there is a station and from where it returns to Esquel.

In the surroundings and dwelled are some Mapuche descendants, mainly devoted to pastoral activities and crafts production in looms, which they sell in craft shows that are held occasionally. Every year in March, its main religious ceremony, called Camaruco, calls them at the foot of Nahuel Pan hill to invoke his God, Nguillatún.

In winter when the snow paints the landscape in motion the train, passengers themselves can take logs to the salamander's car, and then heat and stay inside.

Los Alerces National Park Among waterfalls, streams and beautiful sceneries and the beginnings of the beautiful Valdiviana Jungle. Trekking or sailing tours, and the possibility of camping within the Los Alerces National Park
Leleque Museum: to the rescue of Patagonian history Historical Museum of Leleque is a carefully crafted space in the middle of the Patagonia steppe. It shows the history, stories and legends of a land largely uninhabited.
Futaleufú dam and river Futaleufu dam is an important structure built during the seventies, whose function is to generate power to meet Aluar's demand on the coast of Chubut.
A trip to Chile from Esquel The San Rafael Glacier, located in the homonymous lake in Chile, provides an excellent excuse for a unique tour visiting the mountain forests near Esquel, the beautiful Valdiviana forest in Chile and return through the north of Santa Cruz.
From Esquel: Lago Puelo National Park Less than 200 kilometers from Esquel, traveling a nice path between foothills hills, one reaches the Lago Puelo National Park, which offers beautiful sceneries and countless activities.
Esquel hosts cycling competetitions Esquel is one of the host cities of national cycling championships.
Fishing in Esquel: Futaleufu River basin In the Esquel region most rivers drain into the Pacific allowing fishing of species that are commonly found in Chilean rivers.
More than 100 years since the referendum A fact that few people in this country are aware of is that in 1902 Trevelín Welsh settlers chose to be Argentine and not Chilean, certainly influencing the final decision of the arbitration award on these lands.
Colony Lago Rosario Told by its protagonists, the moving story of the inhabitants of the Colony Lago Rosario has been published in the book "Memorias de Humo".
Summer in Esquel Horseback riding, rafting, bird watching, visits to Ice Tunnels and to the Los Alerces National Park are some things you can do during the summer in Esquel.
See all Articles