Butch Cassidy and the Sundance Kid in Patagonia See map 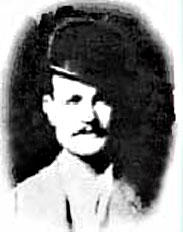 Robert Parker and Harry Longabaugh, known by name of outlaws, Butch Cassidy and Sundance Kid, along with Etta Place arrived in 1902 and bought a farm in the Tigre River near Cholila. The money came from the great Northern train robbery in 1901.

The Pinkerton U.S. agency researchers followed them to Cholila. Then they sold the residence and hid in another one very near Pico River changing their identities to common Welsh names in the area.

The "Wild Bunch", as they were called, soon stole the local post killing the owner. And from there the legend says that the escape ended in Bolivia, where they wete eventually killed.

Another story claims that they escaped to Chile across the Andes with the help of a skilled. The stories that you hear on Pico have a different ending: an old iron cross with engraved names, resisting the passage of time on a distant hill a few kilometers from the town seems to say that Buitch Cassidy and the Sundance Kid did not die in Bolivia.