Valley of the Moon in General Roca See map

In Cuyo they call them "Huayquerías" but science prefered to call them Badlands, a term inherited from the Indians Dakotas. They are an extreme version of desert: environments of embryonic soil almost devoid of vegetation, in which wind and little rain shape at their will. Popularly called the Valley of the Moon, but there is no place on earth closest to Mars.

On the outskirts of General Roca is this beautiful geological formation that attracts thousands of visitors in all seasons. 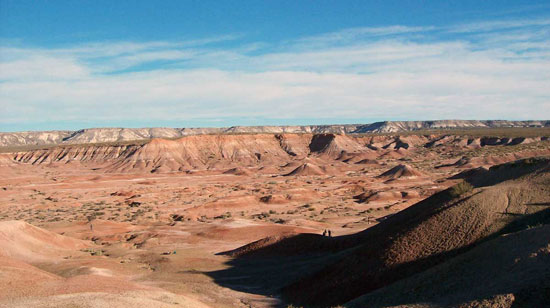 View of the Valley of the Moon in the Paso Córdoba area. Photo courtesy of Natalia Pérez Pertino.

To be more accurate and arrive without getting lost: take from the center of town to the roundabout of National Route 22 and Avenida Roca. From there, follow the road until the Paso Córdoba roundabout where you take Provincial Route No. 6 to the Paso Córdoba bridge over the Negro river, about 8 miles ahead. After crossing the bridge continue on RP No. 6 about 4 kilometers up to two small shrines of Ceferino Namuncura and Gauchito Gil, there down from the asphalt, taking a gravel path toward the river and after traveling 1 km turn at the first turning left.

The Valley of the Moon was declared a Protected Natural Area in 1997, is part of the bard and because of the erosion of the centuries, wind and rain became a site of unusual appearance. From there, nature has another sense, landscapes are magnificent and the view draw fails to penetrate such beauty.

Is one of the biggest attractions of General Roca. There they gather the locals and any visitors to drink mate, eat asado, walking, sports or artistic activities like painting and photography. The river provides a spectacular setting for this geographical formation that contrasts with the green of the fields nearby.

It is composed of sedimentary rocks of different ages Mesozoic, Cretaceous (120 million years ago) and Cenozoic Tertiary Period (55 million years later). Special attention and without diverting from the floor you can find sea shells, petrified wood and many other curiosities that make up this wonderful heritage.

The eagles, vultures and other birds often officiate as guardians, hovering gracefully over the land. The flora is also very varied and interesting despite its desert aspect: jarilla, alpataco, coirón, jume, uña de gato, Zampa, colapiche, molle, matacebo, cactus and many others adorn the landscape.

The land features in both the Valley of the Moon and the rest of the area of ​​bards are conducive to a variety of sports.

Sandy and heavy roof canyons, steep slopes, rocky slopes and ridges are a challenge for riders, enduro and those who use ATVs. It is already an ingredient of the multicolored landscape paragliders sway the bard, making a show of absolute freedom.