Only 600 meters from the Provintial Route 16, at the entrance to Lago Puelo is the Footbridge of the Azul River. There are bus service that leave you on the road just a few meters from the river, both from Lago Puelo and from El Bolsón. 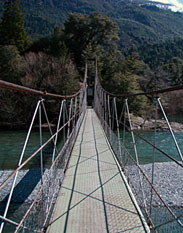 A natural bay forms a unique resort, where you can spend an unforgettable day enjoying the water, but in addition to a trek which suits your preferences.

The Footprint is located at the foot of the mountains. Overlooking the hills Piltriquitrón (hill that houses the town of El Bolsón) Currumahuida and Tres Picos of almost 3000 meters high, the highest in the area.

One runs into the landscape at few yards. Incredible rock formations covered with moss and streams are falling from the same form majestic waterfalls.

Following that canyon located between LIndo and Morrudo hills, about 20 km away is the refuge of Mountain Motoco. The road has a stunning beauty, where you go following rivers and streams that are encased in stone (the stone is spent by the passage of water to form walls on the sides of rivers).

One of the greatest performances offered by the Motoco is the existence of larch forests, a colossal tree reddish in its bark and with the classic form of conifer that gives the feeling of a fairy tale forest. The most important characteristic of this species is its longevity, as they may live for several millennia. 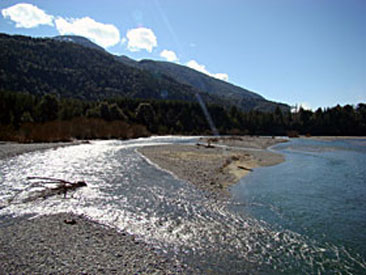 The banks of the Azul river.

Copies are so large that they require several people holding hands to encircle its circumference, and the data that helps us get an idea of ​​their times is that they only grows a few millimeters per year.

The Azul river is the starting point for other destinations such as the lagoon Huemul, Lake Brisas and the international border with Chile.

Lago Puelo National Park The Lago Puelo National Park has an Andean Patagonian forest around a lake of turquoise waters, giving the imposing frame of a place that holds beauty and diversity in Lago Puelo.
Trek to Los Hitos The trek to Los Hitos in Lago Puelo is a real adventure to the border with Chile.
Lago Puelo in winter In the town of Lago Puelo in winter you can perform various activities in the snow, whether in the Perito Moreno hill or around the city.
Places to go in Puelo Both in winter and in summer you can take tours to learn all over the area from Lago Puelo.
Services and activities in Lago Puelo Lago Puelo city offers visitors a variety of activities to learn about the flora, fauna, history and economy of the region. Walks through the fields, hiking and horseback riding are some of the options.
See all Articles