It was created in 1937 and covers 27,600 hectares. An Andean Patagonian forest around a lake of turquoise waters is the imposing frame of a place that holds beauty and diversity in Lago Puelo.

The park is located between the foothills of Currumahuida and adjoins Chile to the west. You can also see the Tres Picos Hill, named for the peaks formed by stone walls.

Lago Puelo National Park has the distinction of being in a transition zone between the Andean Patagonian forest and Valdivian jungle. For that reason is like a genetic lab where you can find unique specimens, as the case of plants of an ecosystem that present mutations to adapt to another. Findings have also been made in what regards to the fauna and there are several researchs conducting currently and from different countries. One was in 1999 when an amphibian specimen was discovered, unique in the world, a frog called Eupsophus emiliopugini.

In ancient times it was covered by a large tongue of ice of enormous size. The effect of ice on the stone was to be formed cracks in the rock formations. At the end of the Ice Age they were filling with water and formed all the mountain lakes that are so seen in these latitudes.

The park is cold, wet weather during the fall and winter, but it is very nice in spring and summer almost utopian where the turquoise waters are warmed by the sun enough to let us in on them and enjoy their immensity. It has a section called "La Playita" where every season thousands of tourists can enjoy a relaxing day of sun, as they would do it in the sea, only surrounded by a landscape of sublime beauty. 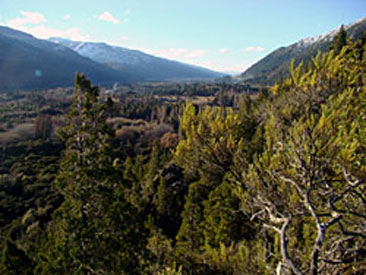 The park is home to plants of the Valdivian jungle of Chile, as in the case of hazel, tique, lingue and ulmo. And the typical flora of the Andean Patagonian forest in the area such as cypress, coihue, lenga, radal, the myrtle, and others.

The rosehip is an invasive exotic plant that has spread in various sectors of the region. The pitra, relative of the myrtle, form forests which together add beautiful but also mystery. They are true  Gothic cathedrals with shady green stained-glass windows. One tour that the park offers is hiking by one of these forests called Pitranto Grande, it is impossible to convey the mystique of this set of whimsical trunks upright as limbs.

Some animals from the region are pudú, huemul (both of the deer family but smaller, now threatened by extinction), the red fox, the puma and the nutria. Among the birds is common to see the huala, the flying steamer duck or qusetro, the mandolin, the pitta and the thrush, among others. In the lake are common native fish such as perch, peladilla and puyén grande, and exotic rainbow and brown trouts.

Beautiful landscapes are seen in the Lago Puelo National Park.

The park offers an area where there are two campsites, one rough and one organized, where the camper can enjoy the amenities that electricity and hot water provided him, not to mention the fact that he is in some of the most incredible places.

Lake excursions are also offered where you have the opportunity to reach Los Hitos, which is the point that divides Argentina and Chile (imaginary line established by a convention).

Forest of Shadows: a journey through a footbridge where you can see specimens such as pitra, the myrtle, and several varieties of ferns among other things.

Lake viewpoint: climbing Currumahuida hill, you can reach vantage points where you can appreciate the magnificence of the park and its surroundings.

Pitranto Grande: a tour of several meters through a single forest.

The Footbridge of Azul River The Footbridge of Azul River in Lago Puelo is the starting point for other destinations such as the lagoon Huemul, Lake Brisas and the international border with Chile.
Trek to Los Hitos The trek to Los Hitos in Lago Puelo is a real adventure to the border with Chile.
Lago Puelo in winter In the town of Lago Puelo in winter you can perform various activities in the snow, whether in the Perito Moreno hill or around the city.
Places to go in Puelo Both in winter and in summer you can take tours to learn all over the area from Lago Puelo.
Services and activities in Lago Puelo Lago Puelo city offers visitors a variety of activities to learn about the flora, fauna, history and economy of the region. Walks through the fields, hiking and horseback riding are some of the options.
See all Articles