The Atlantic coast of Río Negro in Patagonia along its 400 km long coastline offers a range of beaches alternating low and dune areas with ravines sectors that are sometimes high cliffs interrupted by the mouths of rivers and streams. 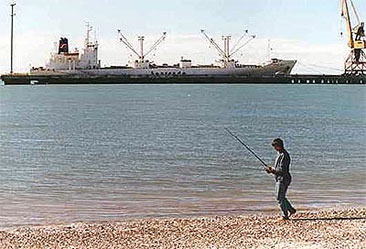 Fishing from shore in the Las Grutas.

From the alternatives offered by the coast for the amateur, the exercise of fishing from beach enjoys greater popularity than the one practiced from natural elevations, piers or jetties. Not surprisingly in summer season is remarkable the fan's concentration waiting to watch the shaft.

In any season fishing in the area of ​​Las Grutas-San Antonio is a great recreational option. Not only you can obtain a variety of fish, but also you have here the incentive to harvest mussels, octopus and other seafood.

There are countless coastal fishing throughout the Gulf area, therefore, for a better interpretation here are outlined two areas:

La Mar Grande: located off San Antonio Oeste, is a shallow beach resort where you can fish with high tide and in all months of the year. The silverside is the most productive in the months October, November, December and in January docks sole, dog and bay.

La Rinconada: perhaps the most traditional fishing by the proximity to the resort of Las Grutas in Patagonia, only 1500 meters. With its many downs is conducive for fishing mackerel throughout the year and one of the best places to catch bass in July and August. Its slippery pebble beach with low water level makes it an appropriate place for the unfolding of many species. There are captured here besides mackerel and sea bass, bream, rays, sting rays, bat fish and sole according to the month in which fishing is practiced.

Resort Las Grutas: in various sectors of the resort, a variety of fishing is practiced according to the tides. Between 3 and 6 drops in the months of summer, it is performed the most important contest of the place with night-catch rooster fish, dog, skate, dogfish, flounder and fish stick.

South Sea: we found in Las Coloradas, El Buque, El Tanque and El Sótano sites of outstanding beauty and variety of species mentioned above. It is advisable to go fishing in the hours before and after the high tide, and given its geography it does not cause inconvenience to the fishermen for its rocky bottom.

The area is rich in regard to the practice of fishing for silversidel, having its most important fishery on the coast north of the town, the area belonging to the Port of San Antonio Este. Among the most outstanding fishing is Pta. Partridge, El Mirador, the shell, El Molino, La Bomba, The Beacon, The Trout, The Three Mills and Sewer (the latter three on the coast road).

In the months of November, December, January and February in evening practices you can capture the dog, skate, dogfish and rooster fish, all pieces very prized by fishermen. But the silverside is undoubtedly the most abundant specie throughout the year, of which you can get multiple varieties like white manila, Matunga, yellow tail, at low tide or high according to the moon and the existing wind. Thanks to the abundance and importance of sport fishing for this specie, currently it is develop the Fishing Contest "The 6 hours Silverside" in La Conchilla, a fishery of many kilometers long and one of the most productive.

Diving in Las Grutas: a clear experience The clear, warm waters of Las Grutas make the city a suitable place for diving.
San Antonio Bay Nature Reserve San Antonio Bay is one of the most important ecological reserves in Patagonia, covering about 50 km, between Las Grutas and Puerto San Antonio Este. In its wetlands, migratory birds rest and find the food necessary to survive.
Fourtrax tours in Las Grutas Fourtrax rides are a classic that you can't missed at the time to meet Las Grutas and its surrounding areas.
The warm waters of Las Grutas. A combination of tides and atmospheric factors warm the waters of Las Grutas in the Patagonia.
The only shellfish hatchery in the country is in Las Grutas Criar is the hatchery of the Institute of Marine and Fish Biology located in Las Grutas. The complex was opened in March 1997 to investigate the techniques that can be employed there.
Fort Argentino: a place to discover A few kilometers from the beaches of Las Grutas there is a special place where to experience an adventure, Fort Argentino. Its landscape, its history, its mystique, all manage to amaze the tourists who visit Patagonia.
National Blue Gulf Festival 1The Blue Gulf Festival and the Tide Festival are celebrated in Las Grutas in the month of February. You can enjoy free live shows, sports and other activities.
Las Grutas: beaches, fishing, tours and more For those looking to stay away from the beaches of Las Grutas, you can find a few kilometers away several different activities and places to visit.
Camping in Las Grutas Information and tips about camping in Las Grutas, the larges beach in Patagonia.
Kayaking and Windsurfing in Las Grutas In Las Grutas there are two fun options to enjoy the sea. Both kayaking and windsurfing can be done in the local sea school.
See all Articles