Punta Tombo: a colony of penguins, to enjoy up close See map

Can you imagine being part of a community of penguins for a day? Well, that's what you can do in Punta Tombo to 181 kilometers from Puerto Madryn and 110 or so of Trelew.

Punta Tombo allows you to enjoy of Patagonian penguins.

In this Wildlife Reserve you can walk among these elegant birds, observe their way of life, monitor their baby steps, watch their nests and hatchlings remain in the bush and see a little more distance how they swim in the sea.

Punta Tombo is the biggest Magellanic penguin colony in the world, and not only that, there is no other penguins settlement of this size which can be easily accessed. However, to keep it that way you should be strictly enforced this saying that: "look, not touch."

As a protected area, it has the minimum infrastructure needed for its operation (bathrooms, quick shop, office entrance fee and there is a project of interpretive center of flora and fauna).

If you return the same gravel road you turn to Route 25, where you can choose to go to the coast, visiting the capital city of Chubut, Rawson, with its beach Playa Unión, or take to the lower valley of Chubut River through the city of Trelew. For the same road that leads to Esquel (N º 25) you can reach Gaiman, a Welsh colony that retains its traditions. One tip: be sure to try the Welsh tea.

The Reserve and its penguins

Punta Tombo is a narrow, rocky strip into the sea about 3.5 km. Its wide beaches have a gentle slope that leverage the penguins to make their nests. In 1979 the province of Chubut declared Wildlife Reserve to protect the Magellanic Penguin and the species that live with them.

Birds arrive here every year to nest, mate, have offspring and mutate to then start back to the northeast of South America and cyclically return the following year. Visitors are amazed watching how they move back and forth looking for their nests or running after their chicks.

Penguins are marine birds. They have wings but do not fly as they are adapted for swimming. It is that these birds spend most of their lifes in the water, they even sleep in it. When swimming they can reach a speed of 8 km per hour, although jumping over the water in short sections outgrow this speed. 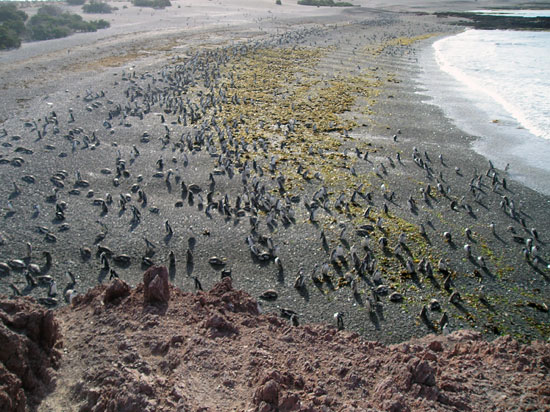 With their characteristic walking, penguins emerge from the sea and head for their nests.

An adult penguin is about 50 centimeters and weighs about 5 kilograms. The plumage that characterizes the species is the white breast, black back and a black and white double collar. The vocalization of adult penguins is like a bray. It is used to ward off strangers and attract mates. Instead the young, with a chirping and whistling continued, ask for they deserve food.

What do you see depending the season

August or September: You can see the arrival of males and females, territorial struggle and the nests construction.

October: Time of incubation of the eggs. Between 30 and 45 days.

November: Birth and early care of the chicks. 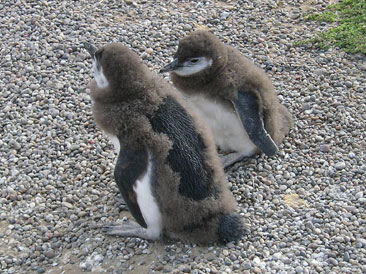 The pigeons in full swing of their fur.

December: Growth and intense activity on the beach and the gulls and skuas nest stalking.

January: The chicks leave the nest, moult and begin their incursions into the sea.

February: The juveniles moult their plumage, occupy the beaches, and it is difficult to reach the sea.

May, June, July and August: This time of year you can not see the Magellanic penguins because they are at sea feeding.

Peninsula Valdés: a unique wildlife reservoir 3Peninsula Valdes in Patagonia is a unique natural area in the world, blessed with the presence of sea elephants and lions, penguins, birds, and the famous Southern Right Whale, which comes to breed here.
Ecocentro: a place to discover the sea Ecocentro in Puerto Madryn is an institution dedicated to the study of marine life.
Diving in Puerto Madryn 2Puerto Madryn is a great place for diving. Clear waters and well organized tours entice newcomers to the city, even those already experienced in the activity.
Punta Loma: Natural Reserve A large reserve of sea lions of a hair can be found only 17 km from Puerto Madryn. Must do opportunity to meet them.
A day in the ranches of Patagonia, near Madryn From Puerto Madryn and Puerto Piráamides you can hire a tour that allows you to approach the culture of the countryside in Patagonia. Half day to participate in various activities of a ranch.
Visiting the Florentino Ameghino Dam from Madryn The Ameghino dam is a frequently ignored place, which is worth visiting. In the lake surroundings you can camp and practice different sports.
Cultural activities at the Ecocentro The Ecocentro of Puerto Madryn seeks to combine art, science and culture and in this framework it provides concerts and shows.
National Cordero Festival in Puerto Madryn The National Cordero Festival is a celebration to taste some traditional dishes of Patagonia and enjoy rodeo shows.
What to do in Puerto Madryn Puerto Madryn offers tourists plenty to do outdoors and also wildlife tours in order to enjoy the area.
Madryn Al Plato: The foods of Patagonia. Each winter the event takes place the gourmet event Madryn al Plato. It gathers leading experts to give workshops and classes. There are also tasting local dishes. It will be held on July 25 to 30, 2011.
See all Articles