Peninsula Valdés: how to get there from Puerto Madryn See map

National Route 3 runs the entire Patagonia from north to south, always staying close to shore. This route meets Provincial Route 2 at the height of Carlos Ameghino Isthmus. You should take this route to the east to enter the peninsula. By bus, plane or car, the starting point to get to this Natural Reserve is usually Puerto Madryn, which has all communication services: port, airport and tourist agencies.

From Puerto Madryn, in whale season (June to December), it's worth making a first tranche by Provincial Route 4, gravel route, taking the opportunity for a first Coastal Whale Watching on the beach El Doradillo, considered natural reproduction area. 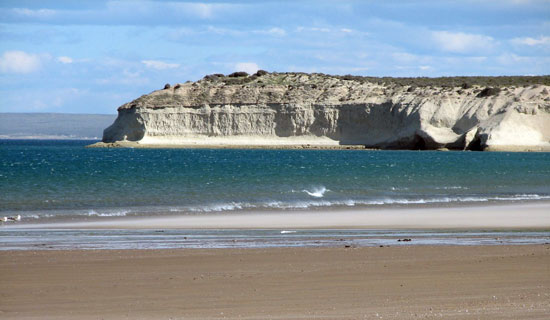 The Doradillo, 17 km from Puerto Madryn, excellent beach where you can see whales up close. Photo courtesy of E. Lembeye, photo album Patagonia.com.ar

Having gone 77 miles you reach the Carlos Ameghino Isthmus, the gateway to the Peninsula Valdés Comprehensive Wildlife Reserve. About 25 miles later you reach the tourist village of Puerto Pirámides, where you can make the Right Whale sightings on boats prepared for that purpose.

At 5 km away is the Lobería Punta Pirámides, a colony of sea lions of a hair during the breeding season, which is between December and March.

Also from Puerto Pirámides you can go to Caleta Valdés, a colony of sea elephant, and to Punta Norte, with lions and sea elephant, moving through gravel roads within a radius of 75 km approximately.

Just an hour from Puerto Madryn, this tour consumes 400 kilometers round trip. It leaves Madryn north on Provincial Route 1, joining after 17 kilometers with the N°2, always by asphalt. Throughout the trip you do not have to forget that here you touring one of the few places which preserves the features that were the surprise of Charles Darwin more than 160 years ago.