Peninsula Valdés is the most important geographical feature of the Argentine coast. It is located in the northern stretch of the coast of Patagonia, in the province of Chubut. 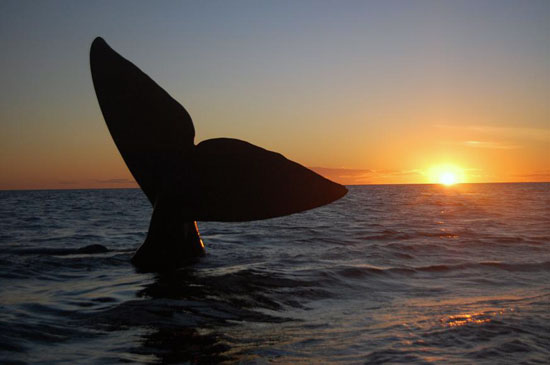 The Southern Right Whale is the biggest attraction of the peninsula. Photo courtesy of C. Nicolini.

The peninsula is made up of two gulfs: San José Gulf and Nuevo Gulf. At the heart of San José Gulf lies the Los Pájaros Island, home to all species of southern birds. At low tide you can reach the island, walking on the uncovered beach bed and in presence of algae. The Nuevo Gulf is, however, a special place for diving due to its deep and quiet waters. In the center of this gulf is the city of Puerto Madryn, port and tourist center of the province.

On the east coast of the peninsula is Caleta Valdés, that in union with Punta Norte, are large settlements of sea elephants.

In 1999, Peninsula Valdés  was declared a Natural Heritage of Humanity by the UNESCO because the species that live there are, in many cases, endangered. For this reason, entering the Protected Area has a cost according to age and place of origin of tourists.

Between June and December, the peninsula receives special visits. To Puerto Pirámides, located within the Peninsula Valdés, reach more than 1000 specimen of the Southern Right Whale. It is the most densely populated site of this species and it can be seen through tours by boat or by diving.

You can get to Puerto Pirámides by direct transport service which is offered in Puerto Madryn, from Tuesdays to Sundays departing at 9:55 and return at 18 hours. It can also be accessed by car on National Route 3 to the junction with Provincial Route 2 and from there directly to the resort village.

What to see? The date of the year determines the species present. The following schedule summarizes the situation.

The tradition invites you to explore the immense beaches of the Peninsula Valdés on horseback. But you can also mountain biking, sandboarding, kayaking, sailing and observation and interpretation hiking of the species that inhabit the peninsula.

In both Peninsula Valdés and Puerto Pirámides exists a varied service hotel and guided activities prepared to explore every corner of the site.

Whale Vigil in Puerto Pirámides The arrival of the whales to the cost of Patagonia is a unique experience. For four consecutive years, this is done through a live broadcast via the Internet and television called the Whale Vigil.
The Southern Right Whale: giants in the southern seas Each year the Southern Right Whale arrive to the coast of Patagonia to mate and raise their calves. Puerto Pirámides is the ideal place for whale watching.
Valdes Peninsula: The Complete Circuit Valdés Peninsula offers many attractions along its coast and interior. A well-planned trip can result in a full day of enjoying the incomparable nature Patagonia offers.
What to do in Puerto Pirámides Pirámides offers many different activities, both on land and in the water, to get to know the marine fauna of Patagonia.
Enjoy sun and beaches of Puerto Pirámides Whales and seals are not the only attractions of Puerto Pirámides. Its long beaches, warm weather provided allow you to enjoy them all year.
Punta Norte in Peninsula Valdés 2At Punta Norte, the visitor can find a large population of sea elephants and sea lions of a hair, as well as orcas when they come in search of food.
Sea lions and sea elefantes in Puerto Pirámides Not only whales dominate the appeal of Peninsula Valdés. Sea lions and southern sea elephants have breeding colonies of large numbers of specimens, which certainly attract the eye of scientists and curious onlookers eager to discover the marine fauna.
De los Pájaros Island Natural Reserve Near Puerto Piramides is the De los Pájaros Island Reserve established in 1967 which aims to protect species of birds living in the Peninsula Valdpes. The island is 800 meters from the coast in the San José Gulf.
See all Articles