The arrival of the whales from anywhere on the planet Earth is a unique experience to see. For four consecutive years, this is achieved thanks to the live broadcast via the Internet and television Whale Vigil.

Visit the web site from where the vigil was transmitted.

This natural and unforgettable event happens at the end of May off the coast of the Peninsula Valdés when hundreds of southern right whales arrive from other waters to mate, give birth and nurse their young here, as they find this region a special place for this natural and vital moment of cetaceans.

There is so much the number of whales that are so close to the coast that allow tourists see them from boats prepared for that purpose, and from the beach. The beaches of El Doradillo are best for watching the mammals of 15 meters long and 40-ton average.

According to National Parks:

"The head occupies almost a third of their body and in it stands a curve mouth with 220 to 260 baleen plates or "whales" of more than one meter in length and up to 2.7 meters, hanging on each side of the upper jaw. With these filters the water retaining small organisms which feed. At the top and sides of the head it has a hardened calluses formed by thickening of the skin. Because these streets have shapes and sizes ranging from one individual to another, they have a unique pattern. Currently there are over 1,800 different individuals identified, who have lived in one time or another in the Peninsula Valdés."

The first place to arrive is El Doradillo, where you can until hear them. Then they go to Puerto Pirámides, stay until mid-December when they migrate to the Antarctic. The places that run are: the South Atlantic, the Argentine Sea and the Peninsula Valdés.

Hundreds of people visit Puerto Madryn in the time of arrival of the whales and enjoy the many other natural wonders that are in the province of Chubut. 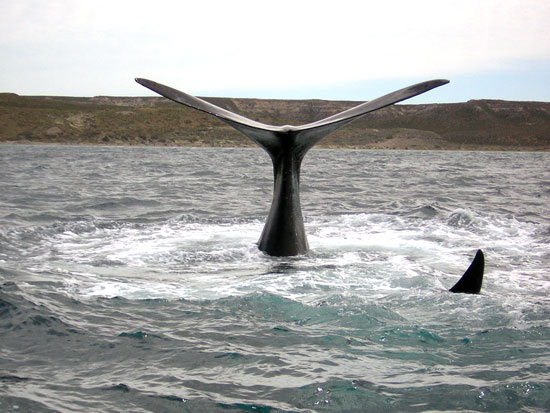 The giants of the sea offer a unique show each year as they approach the Patagonian coasts.

Beginnings of the vigil

In 2006 it was carried out the proposal of whale watch providing the ability to see "live" the arrival of the whales off the coast of Chubut, which starts each new season of whales.

It was a 72-hour broadcast on channel 7 of Rawson "Chubut TV" for all of Argentina and through the website of the province of Chubut (translated into four languages) to any country in the world, reaching more than 140,000 visits each year.

Moreover, the impact of the vigil came to be a recognition by the Journalists Association of Television and Radio (APTRA) of Argentina that awarded a Martin Fierro to the TV production as "Best Documentary".

It should be noted that in 2008 there were different activities during the Vigil, as the innovative proposal that sang Javier Calamaro underwater in a unique underwater show with a range of topics devoted to whales, special thanks to technologies.

Unfortunately, the last records of live Vigil dating from 2009 between May 30 and June 1 of that year.

The Valdes Peninsula The Valdes Peninsula is home to the right whales and a great variety of Patagonian wild life.
The Southern Right Whale: giants in the southern seas Each year the Southern Right Whale arrive to the coast of Patagonia to mate and raise their calves. Puerto Pirámides is the ideal place for whale watching.
Valdes Peninsula: The Complete Circuit Valdés Peninsula offers many attractions along its coast and interior. A well-planned trip can result in a full day of enjoying the incomparable nature Patagonia offers.
What to do in Puerto Pirámides Pirámides offers many different activities, both on land and in the water, to get to know the marine fauna of Patagonia.
Enjoy sun and beaches of Puerto Pirámides Whales and seals are not the only attractions of Puerto Pirámides. Its long beaches, warm weather provided allow you to enjoy them all year.
Punta Norte in Peninsula Valdés 2At Punta Norte, the visitor can find a large population of sea elephants and sea lions of a hair, as well as orcas when they come in search of food.
Sea lions and sea elefantes in Puerto Pirámides Not only whales dominate the appeal of Peninsula Valdés. Sea lions and southern sea elephants have breeding colonies of large numbers of specimens, which certainly attract the eye of scientists and curious onlookers eager to discover the marine fauna.
De los Pájaros Island Natural Reserve Near Puerto Piramides is the De los Pájaros Island Reserve established in 1967 which aims to protect species of birds living in the Peninsula Valdpes. The island is 800 meters from the coast in the San José Gulf.
See all Articles