In addition to the classic right whales, Peninsula Valdés is home to other marine mammals. These include sea lions and sea elephants, two species that are very similar and different at the same time, giving it a special color to the peninsula and becoming an attraction for thousands of tourists that every year visit this region of the Patagonia.

There are several sea lion rookeries in the peninsula, which become true breeding colonies from December, while there is only one sea elephant colony, where approximately 9600 babies are born each year. Both species fall within the pinnipeds (scientific name), sea lions belong to the family of otarids (sea lions) and elephants to phocids (seals).

Sea lions of a Hair 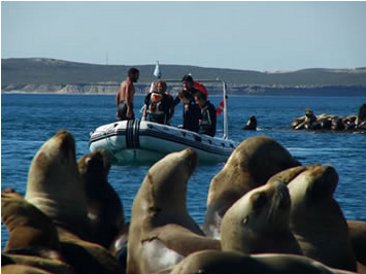 Sea lions watching on the Peninsula Valdés. Photo courtesy of the municipality of Puerto Pirámides.

These mammals are well adapted to the aquatic environment and to the land. They feed in open water and stay for a period of time on the coast to spawn, move their coat and relax. The nearest colony is "Lobería Punta Pirámide", which is reached by car or walk for half an hour.

The distinguishing feature of the sea lion is the lion's features, since males have a head with a thick mane robust covering the neck and chest. The color of adults varies from brown to light brown, while the babies are black and at one month of age they shed to their classic dark brown color.

In the month of December you can show that breeding colonies or rookeries begin to be occupied by males, who await the arrival of females. To win a place on land there are fierce battles between the males with little physical contact but a lot of threatening postures and roars. After the dispute, each male gets a harem of 10 females, although then they "steal" the female damaging it and the puppy who is in the middle of the fight. In late February end reproductive activities, reamining the females and pups on land.

Like the sea lions they are adapted to aquatic and terrestrial environment. The hallmark of this specie is its prosbosis or trunk that developed at 8 years old, and due to it they were given the name of sea elephants. They also have very large eyes that makes them capable of diving to great depths. 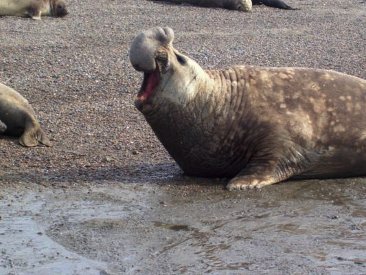 Peninsula Valdés is the only continental colony of this specie hosting more than 20,000 sea elephants during the reproductive stage. It is also the only colony that continues to grow, with the other rookeries in the world declined in number by 60%.

Sea elephants spend most of the year at sea and only approach the coast to molt their fur and reproduce. The males arrive in August and the females the following month. You can see similar fights between males to see who is the male "alpha" of the harem, but in these cases there is physical contact. Unlike lions, dominant males can have harems of up to 100 elephants.

Females nurse for 25 days their cubs, who then must undergo a fasting period of 30 to 90 days on the coast to finally venture out to sea in search of the first solid food. This feature is one of the most difficult for the young that leads to high mortality rates.

Whale Vigil in Puerto Pirámides The arrival of the whales to the cost of Patagonia is a unique experience. For four consecutive years, this is done through a live broadcast via the Internet and television called the Whale Vigil.
The Valdes Peninsula The Valdes Peninsula is home to the right whales and a great variety of Patagonian wild life.
The Southern Right Whale: giants in the southern seas Each year the Southern Right Whale arrive to the coast of Patagonia to mate and raise their calves. Puerto Pirámides is the ideal place for whale watching.
Valdes Peninsula: The Complete Circuit Valdés Peninsula offers many attractions along its coast and interior. A well-planned trip can result in a full day of enjoying the incomparable nature Patagonia offers.
What to do in Puerto Pirámides Pirámides offers many different activities, both on land and in the water, to get to know the marine fauna of Patagonia.
Enjoy sun and beaches of Puerto Pirámides Whales and seals are not the only attractions of Puerto Pirámides. Its long beaches, warm weather provided allow you to enjoy them all year.
Punta Norte in Peninsula Valdés 2At Punta Norte, the visitor can find a large population of sea elephants and sea lions of a hair, as well as orcas when they come in search of food.
De los Pájaros Island Natural Reserve Near Puerto Piramides is the De los Pájaros Island Reserve established in 1967 which aims to protect species of birds living in the Peninsula Valdpes. The island is 800 meters from the coast in the San José Gulf.
See all Articles