Within the Peninsula Valdés it is Punta Norte, a Natural Protected Area, created on September 29, 1967 in order to preserve the wildlife that live there, a large colony of sea elephants and sea lions of a hair. 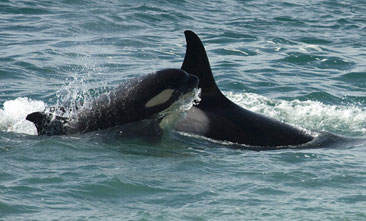 Punta Norte is located about 77 km from Puerto Pirámides and is accessed through National Route 3. There you can watch the sea elephants and sea lions throughout the year and in great number between December and April which is their breeding season. For this reason, it is also possible to spot the great spectacle that give us the orcas when they reach these places in search of food.

On the way to Punta Norte, the visitor can observe the native fauna characteristic of the steppe. Among them are martinetas, guanacos, rheas, sea and land birds that nest in the area as well as lizards, jararacas cream and mammals such as hairy armadillo, cavy, tuco-tuco, jack straw, bobcat, gray fox, mara.

At Punta Norte you will find an interpretive center and trails with information signs in all areas of allowed access to guide tourists during their visit.

The orcas are the largest dolphins and murderers of the ocean, through the technique of intentional stranding, they feed on seals and sea elephants. These mammals can be spotted mostly between February and April with a larger number of specimen on the peninsula each year.

Orcas are commonly referred to as "killer whales", but they actually belong to the family of dolphins and not of whales. Males reach to measure 10 meters and weigh 9 or 10 tons, while the smaller females measure 8.5 m and weigh between 7 and 8 tons. The main difference between the sexes, in addition to size, is the dorsal fin, as the male's one can grow to 2 meters tall and the female's one has a small bend backwards at the tip.

In this place, there are several foundations that work with wildlife on the peninsula. These include the Punta Norte Orca Research Foundation, an international non-profit organization that is sworn to the scientific study of orcas.

Whale Vigil in Puerto Pirámides The arrival of the whales to the cost of Patagonia is a unique experience. For four consecutive years, this is done through a live broadcast via the Internet and television called the Whale Vigil.
The Valdes Peninsula The Valdes Peninsula is home to the right whales and a great variety of Patagonian wild life.
The Southern Right Whale: giants in the southern seas Each year the Southern Right Whale arrive to the coast of Patagonia to mate and raise their calves. Puerto Pirámides is the ideal place for whale watching.
Valdes Peninsula: The Complete Circuit Valdés Peninsula offers many attractions along its coast and interior. A well-planned trip can result in a full day of enjoying the incomparable nature Patagonia offers.
What to do in Puerto Pirámides Pirámides offers many different activities, both on land and in the water, to get to know the marine fauna of Patagonia.
Enjoy sun and beaches of Puerto Pirámides Whales and seals are not the only attractions of Puerto Pirámides. Its long beaches, warm weather provided allow you to enjoy them all year.
Sea lions and sea elefantes in Puerto Pirámides Not only whales dominate the appeal of Peninsula Valdés. Sea lions and southern sea elephants have breeding colonies of large numbers of specimens, which certainly attract the eye of scientists and curious onlookers eager to discover the marine fauna.
De los Pájaros Island Natural Reserve Near Puerto Piramides is the De los Pájaros Island Reserve established in 1967 which aims to protect species of birds living in the Peninsula Valdpes. The island is 800 meters from the coast in the San José Gulf.
See all Articles