Near Puerto Pirámides is the De los Pájaros Island Reserve established in 1967 with the aim to protect species of birds living in the Peninsula Valdés. The island is 800 meters from the coast in San Jose Gulf. 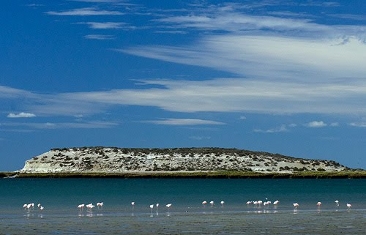 The De los Pájaros Island has an area of ​​170 meters long by 75 meters wide and contains species such as cormorants, egrets and witches gulls, Bigua, oystercatchers, flamingos, Magellanic penguins and terns.

Extensive shallow beaches do that appears to be a marine lagoon. At low tide that happens every 12 hours the island is connected to the mainland exposing marine life. You can see crabs, algae, and so on.

Since 1974 it is barred the entering to the island considered intangible zone on the coast but there is an interpretation center where binoculars were installed so that you can see the flight of birds and animals in their natural habitat.

Another option to visit in the area is a replica of the Chapel of Fort San José that was built in 1779 by a Spanish mission in the first colonization of the Patagonian coast. In 1810 the fort was destroyed by the native peoples. The replica of the chapel stands as proof of the old Spanish settlement.

Whale Vigil in Puerto Pirámides The arrival of the whales to the cost of Patagonia is a unique experience. For four consecutive years, this is done through a live broadcast via the Internet and television called the Whale Vigil.
The Valdes Peninsula The Valdes Peninsula is home to the right whales and a great variety of Patagonian wild life.
The Southern Right Whale: giants in the southern seas Each year the Southern Right Whale arrive to the coast of Patagonia to mate and raise their calves. Puerto Pirámides is the ideal place for whale watching.
Valdes Peninsula: The Complete Circuit Valdés Peninsula offers many attractions along its coast and interior. A well-planned trip can result in a full day of enjoying the incomparable nature Patagonia offers.
What to do in Puerto Pirámides Pirámides offers many different activities, both on land and in the water, to get to know the marine fauna of Patagonia.
Enjoy sun and beaches of Puerto Pirámides Whales and seals are not the only attractions of Puerto Pirámides. Its long beaches, warm weather provided allow you to enjoy them all year.
Punta Norte in Peninsula Valdés 2At Punta Norte, the visitor can find a large population of sea elephants and sea lions of a hair, as well as orcas when they come in search of food.
Sea lions and sea elefantes in Puerto Pirámides Not only whales dominate the appeal of Peninsula Valdés. Sea lions and southern sea elephants have breeding colonies of large numbers of specimens, which certainly attract the eye of scientists and curious onlookers eager to discover the marine fauna.
See all Articles