The cultivation of fish and other aquatic organisms is an extensive development activity throughout Patagonia. 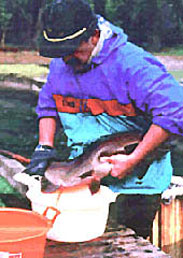 Aquaculture is known as the cultivation of aquatic organisms in more or less controlled conditions depending on the culture system used. The objective is to obtain a final product, being a fish, a crab or an algae of uniform quality to be marketed. Currently, in addition to marine and freshwater fish, in the world are grown shellfish such as oysters, mussels, snails, lobsters, shrimp and algaes. And some Asian countries have significant production of algae used for human consumption and also for the manufacture of paints.

Is the breeding of fish both freshwater and saltwater. It is actually a branch or a section of aquaculture. In Bariloche and catchment area there are several rainbow trout farms (the unique fish that is raised up to industry standards in the country) catering to local businesses and the market in Cordoba, Buenos Aires and Rosario.

These trouts are sold in fishmongers and supermarkets, and there are rainbow trout farms in Cordoba, San Luis, the mountains of Buenos Aires and in the Patagonian provinces, being the largest those in Alicura reservoir in the edge of Río Negro and Neuquén.

Thus, aquaculture can make a sustainable resource management. But like any activity, it has an impact on the environment. For example, the pet food that trout do not eat, feces, metabolic products of fish that are left in the water among other things, change the quality of the environment and could cause problems for other organisms and even humans if they consume that water. For this reason, it is been tried to reduce the impact and the provinces of Río Negro and Neuquén confine fish farming to reservoirs, artificial environments where there are no nearby towns and therefore no drinking water. Anyway, there are farms prior to the enactment of this law such as those in Lake Moreno, Virgen de las Nieves and some of the rivers.

The procedure used in fish farming 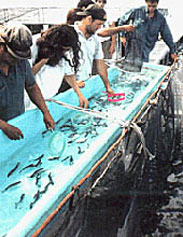 Trout egg born, is raised in small tanks until it can start swimming. At first it do not need power because it has a viatl sack that feeds it, but then as it increase in size, it is changed to larger pools with good quality, clear and not too hot water, with temperatures not exceeding 20° C, and only then it begin to receive food. There are two basic forms, one can be dug in ground pools or concrete, which are long pools where the water runs as Virgen de las Nieves. And the other is with cages where there is a frame with a net bag where the fish are. The frame floats and the fish live in the lake, but locked in a cage. It has the same requirements as the other technique, only that the use of cages allows a greater production, while in the pools, in the dry season runs less water.

Then, the fish will be sorted by size and it is checked that all grow evenly, ready to be caught, killed or slaughtered at the right time. The important thing is that fish farming can have fish always available for most of the year. There are two forms of rainbow trouts sold in the country. One that measure up to 25 cm long and 300 grams weight, which is sold in hotels and restaurants and a larger one, of two kilos which is prepared in restaurants. In industry, which is sold in this area is the rainbow trout. There have been experiences in Chubut and Santa Cruz with Pacific salmon but many have failed because the coast of Argentina is very exposed to strong winds that can break the cages. In that sense, Chile placed the cages in the sea and has a great production. Therefore, this neighboring country ranks fourth worldwide in the production of salmon.

A career dedicated to the activity

At Bariloche Regional Center of the University of Comahue you can consider studying Aquaculture Technology that lasts three years and has a stronger orientation towards farmed salmon because it is the most commonly performed in the area. But it also has subjects which study the cultivation of marine organisms and other species of fish.

According to Marcelo Alonso, "in this course there are given the theoretical basis so that one could start to work with these organisms and raise them". Bariloche is the only place in the country where you can study this course that has more than seven years of operation and more than one hundred graduates all around the country, and have even studied people from other countries such as Panama, Chile and Peru.