Some trips we do by first intention, others inspire more respect to us and we do some previous attempts, or we just simply improve the performance by getting to know what we need to go in a possible return.

The right bank of the Limay River is an inexhaustible source of surprises for our thirst for adventure. We started walking the path that begins on the bridge of the paved road, across the farm San Ramon, and stretching the time we arrived at Villa Llanquín, which is itself a beautiful ride. 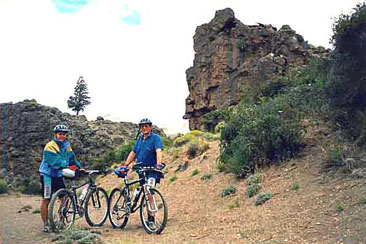 Then we came up among others, to travel around the Chacay. So one Sunday we went directly to the Villa, we crossed the car with the raft, we left it in a safe and we jump Limay down on a trail that follows the river.

Some sections are very exposed because the slope that ends on the Limay is very steep. At that time I did not have clipless pedals, and several times I nearly lost my balance dropouts looking to resume the march. It occurs to me that it would be advisable for those who do not have much security, do some stretches on foot, anyway gloves and helmet, always.

I had my own experience, as we all, in a long descent down a slope, which fortunately did not have the downstream, near the valley of Chacay. Maybe a little because of the fatigue that causes the tension of seeing the profound and rapid downstream on the left, the fact is that having been a bit behind my classmates in the fall I relax a little to rest: Big Mistake! My speed had increased too much to try to brake, so I went back to take a firmer stand, I stood on the pedals just at the moment a large stone moved under the wheel and I got the bike to forty-five degrees from the direction of travel. I failed to do anything, I was tired, my muscles did not respond. If I just only weighed fifteen kilos less! (I reached to think). The bike disappeared under me, just stay connected to it by a toe, which did not allow the leg to fall forward more or less armed. My hands, fortunately with gloves, were the first to give the stones of the path, but the fraction of time is so short, that I could not lean on them, simply slided and my helmet hit against a stone, so did my glasses, and then the whole body being dragged by the inertia of a few meters in that anything soft bed I which prepared the Limay in millions of years, just for me.

Fortunately, after an interminable seconds, I got to sit up not feeling sharp pains. I have a thorn, several abrasions on legs and arms, the helmet cracked, I spit land, but nothing that means a bar to keep pedaling.

My friends were waiting for me down to make a visible effort to keep from laughing as I recounted my misfortune, it seems that from below the fall was really funny.

Every so often we find homes of villagers, some pens, fences, dogs. At the mouth of Chacay there is also a very green area with irrigation canals.

From the Limay to step beneath Teta Hill is a gap of about six hundred and fifty meters and eighteen kilometers upstream. The road is a pretty good neighborhood and there are several residents.

Also some short downhill, but what is really fascinating are the rocks in the way of small delighted valleys that decorate most of the way and have caves with prehistoric pictographs. To see them you must ask permission and do not forget a flashlight, because they are very dark. When we turn to light, the first impression is amazing, on the edge of rock that crowns the hills that surround us, lined up as hosts, there are rows of stoics cypresses that ignoring the wind, they grow on the stone taking advantage of the small cracks open ice in them. 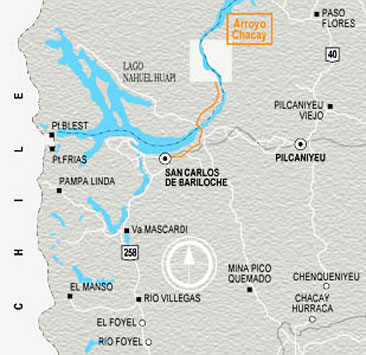 The white box indicates the area where the tour is done.

All the way allows us to imagine medieval towns, castles, animals and human figures, in short, the only limit is our inventiveness exacerbated by the effort and the blue sky streaked by clouds quickly disappearing toward the east.

Several times we cross the stream that decreases its course. Instead what is progressively increasing is the slope until you reach the step.

As a Sunday in elections, we find on the way to a civilian, dressed for the occasion, which would vote on foot and smiling, almost makes us embarrassed by sweat and hunger that could well be only in our imagination . But it was not, and just before the pass, on a beautiful meadow with a stream crystal, we stopped to eat and take fresh water.

Thirty kilometers from our departure, we reached the pass, the view is phenomenal, we could see up to Bariloche. We took some photos but the wind was cooling us, so we put on the windbreaker and we faced the descent very fast.

Indeed, it was a nine kilometers descend to Villa Llanquín, a fantastic flown on a road in good condition in general and with some small fords that we passes.

At reaching the house where we left the van, in which a familiar retired policeman and his family had offered their hospitality, we had a few cold drinks and delicious fried cakes that we simply devour.

I had forgotten the fall, but my face was strangely streaked with sweat over the ground and when I looked in the windows of the car I thought that the grubby that was looking at me had stuck the great shock of his life.

Leaving Bariloche by car by Natinal Route 237 (Neuquén), 38 km we find the raft, the suspension bridge and at the other side of the Limay is Villa Llanquín Limay. You can leave your car at the beach next to the runway. As an example we take the trip made during an election day.

Sunday May 14, 1995
Km 0 - 10: 35 pm. We began to pedal across the bridge at 10: 35 on a presidential election day. Two hundred meters after the bridge, exit a little way downstream on the left. In a few hundred meters it becomes a permanent imprint that borders the Limay river and after passing by outside the homes of some residents, we reached the Chacay stream.
Km 13.3. We reached the height where the Chacay stream empties into Limay river. There are houses with yards, large green lawn irrigation comes from Chacay. Here the trail ends and begins a little neighborhoodway bordering Chacay stream. The road is almost permanently on the rise, leaving the altitude 720 m and reaching 1350 m elevation step. (There are 17.6 km and 630 meters), repeatedly crossing the stream, looking for its source.
Km 20.8. Rodríguez gate and post.
Km 24.0. Large village, then there is a short steep downhill, we cross the river and 200 meters later we find other house and a sign stating "A las Cuevas" pointing to the left. Talk with residents and ask permission and directions. A few km further on the roadside and there are other caves.
Km 29.5. Shortly before reaching the step, there is a green meadow with a brook lens. Break for lunch. Little later is the position of resident Burgus.
Km 30.9 - 15: 45 pm. We arrived at the Pass. From here you can see the Limay and only the eastern end of Lake Nahuel Huapi. The road is all downhill on the "Cañadón Pobre" to the same Villa Llanquín.
Km 38.6 - 16: 45 pm. We arrived at Villa Llanquín. A good tip: 50 meters before crossing the bridge and 50 downriver is the home of the family of a retired police officer, where they sell cold drinks!
Return to Bariloche with vehicle on Route 237.

When to go: it's a trip that can be done in any season except winter, because the clay road that traces the Chacay makes it almost impossible to advance.

Items to bring (in addition to the standard):
- Many Drink (Chacay stream is not clean) and water purification tablets.
- Many insect repellent and sunscreen

Source and Photos: Written by the "Veteranos Biónicos", bikers and creators of the bool that recounts their experiences, "Bariloche en Mountain Bike"