Not always the good weather join us. When we decided to lower Las Bayas stream we had no luck, despite being in a dry area, which biologists call pompously ecotone, the whole time we were threatened by a dark sky with clouds and a strong wind throughout the return was as a "cursed" rise. 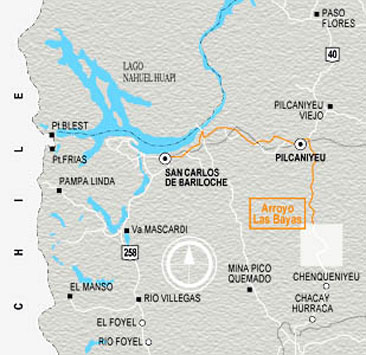 The white box indicates the area where the tour is done by Las Bayas stream.

We left early Bariloche and with a few drops on the windshield, on the road Pilcaniyeu. As we had agreed with the Morán, we left the van at home and prepared in a cold enough to start pedaling at about 10:15 am, but as we ride wind for, we realize.

After we crossed the bridge on route 40 to the left and passed a gate by a car trail in good condition following the stream in its course eastward. All the way to the right of the water course is really a delight, too, the picture is very nice, the stones that surface water are well polished and have varied colors, and the moved way enjoy us, especially since the effort is minimal and we advance at a tremendous pace.

Finally, we came to another gate shortly after which we forded the stream. Later there are houses where there was nobody, but with obvious signs of being inhabited. We left them to our left and a few meters ahead the path makes narrow that occasionally gets lost and disappears among the rocks bordering the stream.

(...) The valley narrows into a geography of large stones from which water flows, often forming quiet pools and sometimes happy runners. From time to time we found real tall grass and gardens with grass and flowers.

Not infrequently we stop to look at the fish that are astonished at our pace, falling in the obligatory comment from fishing. For a moment we intend to stop for eating, but it is very early, later we will have to repent.

Finally, the small canyon widens and we re-cross the river before some houses on the right, to go to meet the Chenqueniyén. Both streams join to form the Chico River, but we did not get to the junction. We are, however, that once the wind starts to annoy.

(...) We crossed the entire field south to find the road that goes up the creek. We were struggling to acquire enough temperature and we started looking for a sheltered spot to take a break for the usually frugal lunch.

The first house we saw around is small but has several cars outside and made us think that all you can be doing is playing cards, we even said some names we known of gamblers in the city. Finally, the place where we stop is the most unpleasant encounter since we rode on bike, so we hurried to go without eating too cold.

We came back to Route 40 and crossed the bridge. There it begins a climb that protects us a little from wind, and near the top, Juan Pablo and Pucho met a beautiful side to the right of way. We found that it was better to climb than to face the wind. But on reaching the top we were in the Escorial del Chenqueniyén, a plateau, with a hill in the center, where was the relay antenna, dark stones that resemble many just a slag and wind and, that wind!

It is impossible to go faster, stronger each pedal costs us three times more force than usual, so that we remain at about 10 kph and pleased do not threaten rain as a few drops hit us like bullets.

At the height of the antenna we paused for breath, we really cold. In the distance the drop spured us. When we arrived, we closed well the jackets and left. It was a fairly rapid decline, with very good background. (...) It seemed we had reached, that we had the houses ahead of us, but the path hit a huge back to find the bridge over Las Bayas stream and Moran's house, which we had crossed in the morning. It was very cold and we were more tired than usual, it was a shame because Las Bayas path stretch is really cute, and perhaps, without wind, also pulled back it had some praise. (...) 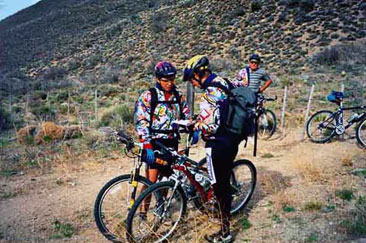 Looking at the maps before embarking on the journey.

08: 00 - Departure from Bariloche in truck with bikes on the roof in their rack. It is overcast and threatening rain.
10: 00 - Passing Pilcaniyeu, then south on Route 40 until you reach "Las Bayas" (approximately 120 km from Bariloche)
10: 15 - After leaving the truck in the Moran family's house, and with their prior permission, we initiated the raid. It is very cloudy, it is quite cold and there is a moderate wind.

0.0 km - 10:15 pm. Begin pedaling.
Km 1.5 - Bridge over Ayo Las Bayas.
Km 1.7 - There is a gate on the left and it started way down Las Bayas stream, leaving it permanently on your left. We wind. The route is flat, very good and we can go pretty fast.
Km 13.2 - There is another gate a little further down the Verde stream.
Km 16.2 - 11:25 pm. Cross the stream Las Bayas. Houses are about 1 km downstream on the other side.
Km 17.4 - The trail leads to the houses. Here ends the "car" way and you must always follow signs to the side of the creek, leaving of course this to the right.
Km 21.7 - Here the valley narrows into a narrow canyon. Always with the creek on the right, sometimes you have to circumvent it with the bike on your shoulder and others pushing for nearly 2 km. It is very little that you can ride.
Km 23.4 - In a very important curve cross Las Bayas stream.
Km 23.8 - End of the canyon.
Km 24.8 - Puesto Confluencia of the streams Las Bayas and Chenqueniyén, leaving it to the right. Climb 600 meters by Chenqueniyén and cross the same at any location (it is very flat and has vast pasture) and look for the dirt road that you see on the other shore.
Km 25.8 - We take a local way going up the creek Chenqueniyén, leaving it in our right. A little later we stopped for lunch near a ditch beside the road. The wind had increased a lot and we have ¾ against.
37.1 km - 14:45 pm. We arrived at the bridge (concrete) on the stream Chenqueniyén, and on Route 40 yet. After the bridge is a sharp rise of about 2.5 km. and 500 meters. (...) After the steep climb we were above the plateau (El Escorial de Chequeniyén), against the wind and with a mild increase (speed of 10 km/h with great effort) to move the repeater antenna on Las Bayas hill.
Km 44.0 - Spent close to the antenna and the gradual descent begins at short distance to the other side of the plateau. After a few miles we reached the edge of the plateau from with a spectacular fall we returned to Las Bayas stream valley. Keeping to the Route 40 we crossed the bridge over the stream and reached the starting point of the Raid.
56.3 km - 16:30 pm. Arrive in "Las Bayas" and end of the "Vuelta al Escorial del Chenqueniyén".

19:00 Arrival to Bariloche after a puncture without consequences in the vicinity of Invap.

1. When to go:
a) The best time would be the month of November and the first half of December, with long days and not so hot.
b) In the middle of December, January and February is very hot, there are more flies and mosquitoes.
c) March seems a good time.

2. Additional elements to bring:
a) A lot of drinking, since the streams are not clean.
b) water purification tablets.

3. Recommendations:
a) Always close the gates.
b) Do not scare animals.
c) Be careful with the bicycle carrier and check that the bikes are going well tied to them and them in the car or truck.

Source: Written by the "Veteranos Biónicos", bikers and creators of the book that recounts their experiences, "Bariloche en Mountain Bike"