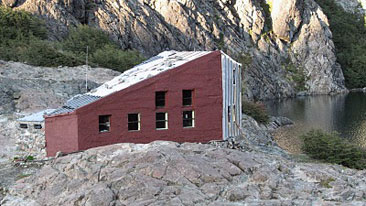 Manfredo Segre shelter on cerro López on the shores of Negra lagoon.

From Colonia Suiza, by National Route 237 you will reach the path that comes to about 300 meters east of the bridge of Provintial Route 79 on the stream Goye. The beginning is a signpost and the path is well marked and signposted. The refuge Italy, located on the shores of the Negra Lagoon, has capacity for 60 people and has kitchen facilities, dining room and kiosk. From there you can climb to the Negro, Bailey Willis and Marino Hills and make trips to Lopez, San Martin shelters and also to Pampa Linda. The rising operating time is 5 hours.

This Club Andino Bariloche's shelter was opened in the 1969/70 season and runs in summer. It is located at 1650 m. above the sea and its surroundings are a true knot of mountains of dark rocks (hence the name) that enable various trips to other shelters and incursions of climbing walls in the area.

Manfredo Segre was an Italian love with the mountains of Bariloche that, at his death, left a legacy for the construction of a mountain refuge. This coincided with an old legacy desire for Italian residents of the area to build one near the Negra Lagoon. Manolo Puente built it and so has, with justice, the name of the donor. 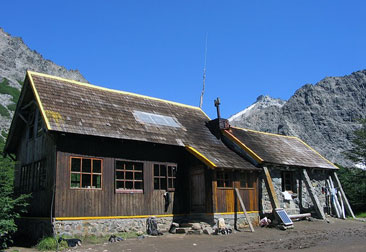 San Martín Shelter on the shores of Jakob Lagoon.

From Colonia Suiza, after crossing the concrete bridge over the Casa de Piedra stream and after traveling about 500 meters, is located on the left hand the sign indicating the start of the walk. San Martin shelter on the shores of the lagoon Jakob lies at 1,600 meters above sea and has a capacity to accommodate 80 people. From here you can also perform different activities and trips. The duration of the march on the rise is 6 hours.