If you have several days off and want to devour kilometers behind the wheel you can organize a trip that combines Andean forest, wet and closed, the mystery of the petrified forests, and the fascinating remains of indigenous cultures that inhabited these territories.

A journey that you will make accompanied by guanacos and foxes on the plateau, families of rheas further south and solitary birds on the fences along the road. Also, if you make some short detours, all the Patagonian Atlantic coast offers wildlife reserves filling with beauty the ride. 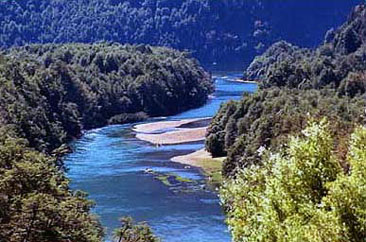 The route that we propose begins in the Andean parallel 42, in the age of union of the provinces of Chubut and Río Negro which includes El Bolsón, the source of the Chubut River, El Hoyo de Epuyén, lakes Puelo and Epuyén, Esquel and National Park Los Alerces with its lakes.

You can choose El Bolson as the first stop and from there penetrate into the mountains on an aquatic trip around the lake Puelo to theTres Picos hill. Or, deviate from the RN N ° 40 and travel the gravel road that connects El Bolsón and Buenos Aires Chico, El Maitén (with its narrow gauge railway), Epuyén and Las Golondrinas with their rich fields in native forests and craft products more varied and delicious.

You can also visit Esquel, a small town with all amenities for tourists, and from there travel to different lakes, forests, National Park Los Alerces and farms. Here the weather is very stable and mild, more protected than the Bariloche area for example.

Rivadavia, Menéndez, Verde and Futalaufquen lakes are interconnected by rivers and streams of emerald green waters feature of the glacial formations.

The layout of the gravel road is beautiful, usually very well maintained. You have to spend at least a day, stop being essential to know the ancient larches and myrtles brown skinned.

Arrayanes River linking lakes Futalaufquen and Verde is indescribable as the setting sun reflected on it all the colors of the foliage. From the route you can identify the glacier Menendez, a preview of the ancient ice formations that occur farther south.

In the fishing season the whole area is rich (with fly and return of parts, of course). And throughout the year, afternoon tea and pastries in Trevelin is an unavoidable ritual, just 50 km south of Esquel, where you can stock up on goat's milk cheese, meats and homemade breads enough to make a long journey to the Atlantic coast. 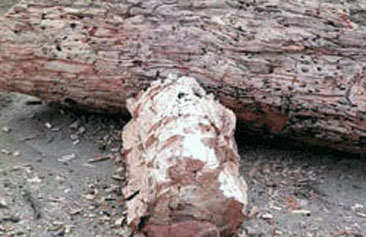 After crossing east Chubut you get to the petrified forest in Sarmiento.

We suggest crossing Chubut by RN N º 40 from Esquel through Tecka to Sarmiento, an oasis built next to lakes Coihue Huapi and Muster of green water, joined by a strait.

35 km south of this agricultural town a gravel road leads to a petrified forest of about 60 million years. The road is usually not in good condition, but the effort will be vastly outweighed by a field of 4 km wide and 80 long in which are scattered on a carpet of wood chips stoned logs  made by the action of silica.

The forest magically appears, nestled in a clay soil dominated by greens and purples. In some of the hills of this park can read its geologic age at first glance, because sedimentary layers of different colors joined with bold colors.

Lovers of photography and walks must be booked several hours for this ride. In this same area, the more adventurous can explore a strange underground geological formation with a guide from Sarmiento.

A few miles away and very close to the road also with a guide you can see a frieze of painted hands as negative, evidence of pre-Columbian civilizations. These paintings are well preserved and are related (in style, color and shape) to the largest cultural monument left by the anonymous and former residents in Patagonia: the canyon of Pinturas river and Cueva de las Manos. The Pinturas river worth a special trip to the place.

At this stage you can relax in Sarmiento or do a couple kilometers to the sea and stay in Comodoro Rivadavia or Rada Tilly. In the section Sarmiento-Comodoro the plateau has very striking shapes not seen so far in this journey. There are also oil wells here that form a very attractive cultural landscape.

In Comodoro you take National Route 3 which in several sections come along the Atlantic coast. While its twin, RN No. 40 continues parallel to the Andes mountain range.

Here try to focus on enjoying the trip, the effect of light on the horizon, solitude or wild animals. You can do 800 km to go into the province of Santa Cruz and make a stop in Puerto San Julián or 200 km further south in Río Gallegos, the provincial capital. 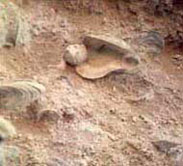 The fossil cliffs of snails in Puerto San Julián.

We recommend not to miss the small town of San Julian, protected from the cold wind from the sea as opposed to Gallegos. Here you can sunbathe on the beach at Los Caracoles, watch from a short distance a small colony of sea lions and also able to fish.

After this stop you can go to Cabo Vígenes, at the southern tip of the american continent or leave for the return from visiting the glaciers to see the reserve of Magellan penguins found there. This is the second largest in South America for the number of individuals who choose these shores to breed between mid October and mid March. You must also experience the feeling of the end of the mainland the same that experienced the Portuguese Fernando de Magallanes in 1520.

To Cabo Vírgenes from Gallegos is 150 km gravel road, crossing the endless Estancia El Condor of Luciano Benetton and an amazing gas plant that seems to emerge out of nowhere. At any time of year is very common to experience the four seasons in a few hours (rain, hail or sleet, sun and rainbow) so take a jacket or windbreaker.

Already en route to El Calafate and the dozens of glaciers located in Santa Cruz the cold of the sea and the roughness of the plateau change as you come close to the range notably lower in this latitude.

Calafate is a small tourist village enabled the whole year, but in winter it is advisable to check the status of routes and paths because of the snow. It is located in the privileged southeast coast of Lake Argentino.

To Perito Moreno glacier which covers an area equivalent to that of the city of Buenos Aires you reach after traveling 85 km by gravel road from Calafate. In 2008 there was the last major rupture of the mass of ice after having blocked the lower arm of Lake Argentino and, consequently, caused the 13-meter rise in the level of the water that exerted enough pressure to break the ice bridge .

Behind a wooded hill, like a magical appearance, is the first part of the glacier going down to Lake Argentino waters. Unlike other glaciers, Moreno can be seen in all its magnitude from the mainland and a few meters away. Still, it is necessary to respect exactly the security measures from Los Glaciares National Park because of permanent ice floes that spread chips with fury.

This glacier can be seen from numerous points that invite you to clear all the senses. It is ideal to have more than one day to admire it from the water by sailing excursions, from the south through another secondary route that skirts Lake Roca, or from its borders more secure on a trekking output.

It may happen that the magnificence of the frozen mass, with its constant activity and falling down under, monopolize our attention at first. So it's very nice to come back, stand back, appreciate it in its relationship with the forest and its native species of important development in this latitude. 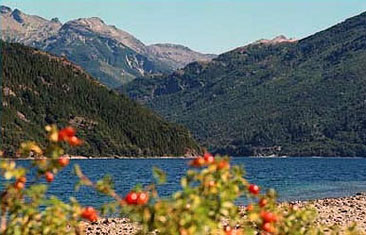 The journey starts in the beautiful Los Alerces National Park.

Nautical excursions are unforgettable. You can get to Upsala glacier the largest glaciers in Argentina. You can also fly in small aircrafts. From the air you will see Leona river that is born in Lake Viedma and empties into the Argentino.

Little Lake Roca and the road to the Perito Moreno glacier is perfect for the flight of ibis and wild duck, among other birds. Also, whoever is in the area can not missed stop closer to the shore of the Leona river, with its green waters that do honor to his name and devour the limits of the coast.

Cerro Piltriquitrón At the foothills of Piltriquitrón hill it is the city of El Bolson. On clear days, from the shelter, you can see the Tronador 100 km away
El cajón del Azul, an unforgettable view El Cajón del Azul in El Bolson is a place that leaves everyone amazed by it's beauty.
Mallín Ahogado circuit in El Bolsón Through the Mallín Ahogado circuit you can tour the attractive lanscape and farming communities.
Loma del Medio and the Indian Head A circuit that will let you see the valley of El Bolson and Indian Head, a rock formation caused by erosion of wind on the mountain.
Los Nogales road - Nahuelpan From El Bolsón through the Camino de Los Nogales you can observe hop gardens, fine fruit, organic vegetables, flowers, dairy, nursery, cheese factories, among others.
Cerro Amigo in El Bolsón Cerro Amigo is located 2 kilometers from the center of El Bolson and is reachable on foot or by car.
El Bolsón in autumn Autumn is a good time to visit El Bolson. Fewer tourists make it an ideal alternative to summer.
Paragliding in El Bolson, to be very close to the sky One of the best sites for paragliding, a risky activity, is the Piltriquitrón hill in El Bolson.
The Rural Exposition in El Bolsón Comarcampo is the Rural Exposition of the Parallel 42 region that take place in El Bolsón.
To remember the past, carriage rides in El Bolson Carriage rides are a new proposal to enjoy the scenery of El Bolson.
See all Articles