Like every year, the Southern Right Whale is approaching the coast of Puerto Pirámides (Chubut) to mate and raise their calves. From June to December you can enjoy this unique spectacle through the traditional activities of watching and diving. 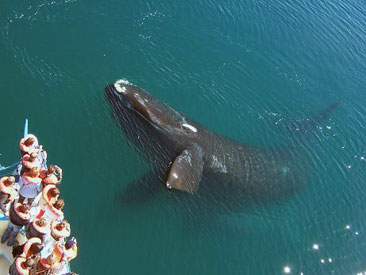 The whale watching tours allow close contact with these mammals.

Access to Puerto Pirámides is made by the intersection of National Route 3 and the Provincial 2, which leads directly to the resort town.

There, visitors will find an attractive option to approach the whales by boat leaving from the coast and travel along the bordering coast to Puerto Pirámides. So you can meet the whales, plus a wide sea fauna consists of orcas, bottlenose dolphins, dusky dolphins, common or southern plain, sea lions and sea elephant.

For the more adventurous, there is the possibility of diving in the clear waters of Argentinian south. The underwater world hides the beauty of the flora and fauna that can be discovered by immersion. Diving practices are performed in the Nuevo Gulf, located southwest of the Peninsula Valdés.

Although sightings occur during the southern winter, temperatures are not extreme, with minimum of zero degrees and maximun of 14 degrees centigrade.

Whale Vigil in Puerto Pirámides The arrival of the whales to the cost of Patagonia is a unique experience. For four consecutive years, this is done through a live broadcast via the Internet and television called the Whale Vigil.
The Valdes Peninsula The Valdes Peninsula is home to the right whales and a great variety of Patagonian wild life.
Valdes Peninsula: The Complete Circuit Valdés Peninsula offers many attractions along its coast and interior. A well-planned trip can result in a full day of enjoying the incomparable nature Patagonia offers.
What to do in Puerto Pirámides Pirámides offers many different activities, both on land and in the water, to get to know the marine fauna of Patagonia.
Enjoy sun and beaches of Puerto Pirámides Whales and seals are not the only attractions of Puerto Pirámides. Its long beaches, warm weather provided allow you to enjoy them all year.
Punta Norte in Peninsula Valdés 2At Punta Norte, the visitor can find a large population of sea elephants and sea lions of a hair, as well as orcas when they come in search of food.
Sea lions and sea elefantes in Puerto Pirámides Not only whales dominate the appeal of Peninsula Valdés. Sea lions and southern sea elephants have breeding colonies of large numbers of specimens, which certainly attract the eye of scientists and curious onlookers eager to discover the marine fauna.
De los Pájaros Island Natural Reserve Near Puerto Piramides is the De los Pájaros Island Reserve established in 1967 which aims to protect species of birds living in the Peninsula Valdpes. The island is 800 meters from the coast in the San José Gulf.
See all Articles