If you are on this journey around the peninsula valdes gasoline is recommended to charge in Puerto Pirámides, as they will be long kilometers of march, dedicated to the animals that inhabit it, and where there are almost no other supply centers. Despite the roads (all gravel) are in excellent condition it is recommended not to drive over 60 kph. For safety there are emergency telephone boxes scattered throughout the journey.

In what sense tour Peninsula Valdés?

You should take into account the tides and what do you want to see, whether whales, penguins, sea lions, orcas, etc. It is best to ask for help at the tourist office in Puerto Pirámides. They can say you the peninsula tides's time and what you should do in each case. For example orcas in Punta Norte are at high tide so it would be a waste to get there at low tide.

Finally one can choose a different circuit, just going along the coast between Punta Norte and Caleta Valdés. The reason is simple. Punta Delgada is closed to the public and accessible only by paying admission to a private property. Then since the peninsula is full of free surprises is perfectly possible to skip Punta Delgada, although the difference in kilometers is minimal. 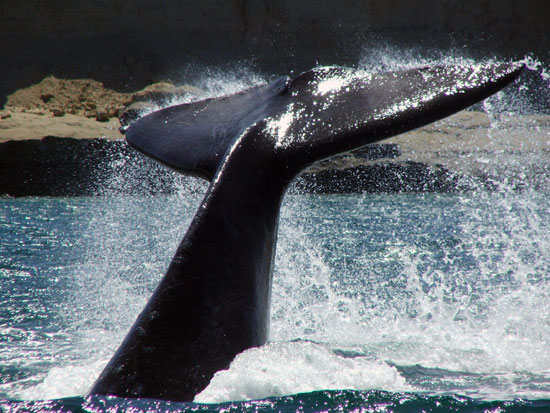 The tail of the whale, the classic postcard. Photo courtesy of George Barone.

A possible Itinerary step by step

From Puerto Pirámides, 5 kilometers is the first reserve: the seal colony at Punta Pirámides, where there are sea lions of a hair that breed and have their babies there from December to March.

The next stop is Punta Norte. Here, even in summer, you can see a large population of sea lions and sea elephants, and at high tide it is possible to see orcas. There is an Interpretation Centre and one of wardens. 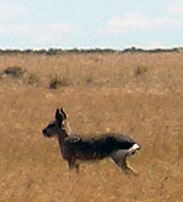 Maras and guanacos are often sighted along the roadside.

Then you can address to Caleta Valdés. There from viewpoints located on the cliff you can see the heavy sea elephants. Restaurant, restrooms, regional products sale and one wardens accompanying this reserve. In addition, two km to the north is a small colony of Magellan penguins.

Punta Delgada, yet at the southern tip of the peninsula, is the next and final reservation to visit. As mentioned before the access is paid, but the cost includes a guide that explains and shows the sea elephant colony. The site offers horseback riding, mini trekking, restaurant, souvenir sales and 4x4 excursions.

Another option for the tourist is thoroughly soak in the tranquility and beauty of the place, staying in one of the five farms that are in the peninsula.

The return to Punta Pirámides, and then again to the Provincial Route 2, to return to Madryn or to National Route 3. But this road should not be done in a hurry, because if we pay attention we can see guanacos, maras and many other animals along the route.

Whale Vigil in Puerto Pirámides The arrival of the whales to the cost of Patagonia is a unique experience. For four consecutive years, this is done through a live broadcast via the Internet and television called the Whale Vigil.
The Valdes Peninsula The Valdes Peninsula is home to the right whales and a great variety of Patagonian wild life.
The Southern Right Whale: giants in the southern seas Each year the Southern Right Whale arrive to the coast of Patagonia to mate and raise their calves. Puerto Pirámides is the ideal place for whale watching.
What to do in Puerto Pirámides Pirámides offers many different activities, both on land and in the water, to get to know the marine fauna of Patagonia.
Enjoy sun and beaches of Puerto Pirámides Whales and seals are not the only attractions of Puerto Pirámides. Its long beaches, warm weather provided allow you to enjoy them all year.
Punta Norte in Peninsula Valdés 2At Punta Norte, the visitor can find a large population of sea elephants and sea lions of a hair, as well as orcas when they come in search of food.
Sea lions and sea elefantes in Puerto Pirámides Not only whales dominate the appeal of Peninsula Valdés. Sea lions and southern sea elephants have breeding colonies of large numbers of specimens, which certainly attract the eye of scientists and curious onlookers eager to discover the marine fauna.
De los Pájaros Island Natural Reserve Near Puerto Piramides is the De los Pájaros Island Reserve established in 1967 which aims to protect species of birds living in the Peninsula Valdpes. The island is 800 meters from the coast in the San José Gulf.
See all Articles