Everything a fisherman needs to know

Fishing is an exciting sport and especially in lakes and rivers in southern Argentina. But to enjoy memorable fishing days in Bariloche and its surrounding there are some details to consider.

Bariloche is an ideal place for fishing. Besides the majestic Lake Nahuel Huapi, practically all the rivers are interconnected with deep lakes that allow the proliferation of valuable fish species. But to find the ideal place according to what each one wants to fish and the technique you want to use, nothing better than having the help of expert fishing guides.

"For those just starting in this sport, it is advisable Pichileufu river for fly casting fishing in baden form, which is from the coast, because fishing in other major rivers like the Limay is much more difficult to a beginner. In lakes it is more used spinning (spoon), which is the technique by which the majority begins to fish. But the preferred technique is the "fly casting" because it is more fun."

In this area there are four species of trout introduced at the beginning of the century. These include: rainbow trout, brown trout, brook trout and landlocked salmon that "is quite restricted in the Traful river, but it can also be found in the Limay River." Besides, in Lake Nahuel Huapi inhabit own native species of the place such as the perch that are similar to croakers, silversides, the puyén small and the puyén large. The latter two are not fished for being the first very small (measuring about 10 cm) and the second because lives at 30 meters deep. 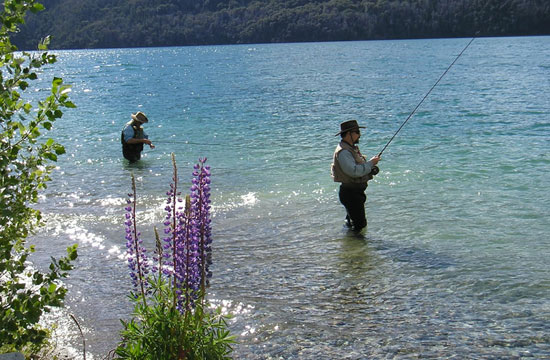 
Where and what to fish

In the Pichileufu river you can find rainbow, brook and brown trouts, as well as the perch which is a native specie that may be caught but not sacrificed.

On the northern shore of Lake Nahuel Huapi there are several rivers and streams that flow into the lake, including Chiñuraco, the Huemul, the Estancada and the Correntoso, where you can catch brook and brown trouts.

On the west bank of the lake there is Pireco stream; in the Machete arm there is the stream of the same name; at 15 km from the junction of Correntoso and in the north of the Blest arm, there are the streams El Cuerno and Millaqueo. You can reach all these places with boat or motor boat, being the most used technique in these places the "trolling" which is to drag lures from a boat.

To the south of Bariloche it outstands Manso river system where there is a small lake called "Los Moscos" with abundant rainbow and brown trout.

Then there are the lakes Fonck, Hess and Roca, where with the trolling and fly ways you can get good copies of rainbow and brook. Besides, Arrayanes port is an excellent fishing of fontinnalis.

Leaving the city and taking National Route 258 to El Bolsón, you can find the place called Pampa del Toro at about 60 km. You must leave the main road and follow to the right, the road that leads the Lake Steffen. From there you can go to a path to Martin. Both are excellent for fishing, especially trout and perch.

In the Pichileufu river you can find rainbow, brook and brown trouts, as well as perch, which is a native specie that may be caught but not sacrificed.

But undoubtedly the most frequented site is the mouth of the Limay River, the largest in the system. The best location is the left bank at a short distance from the lake, with a predominance of rainbow trouts.

And for lovers of fly fishing, nothing better than the northern sector of the Limay River to its confluence with the Traful river. They are also good fishing Caleufú River (in the area of ​​Casa de Piedra, road to Paso Cordoba) or the Pichi Traful and Ruca Malen, in the "Seven Lakes Route." 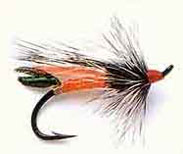 Every tourist who comes to the area needs the right equipment. If you are going to fish in lakes you have to carry spoons and for trolling are used shaved or big spoons with lead lines. In the case of baden which is made walking in the river, clothing suitable for cold is the "wader" neoprene. What best complements a good team is the "reel."

Enterprises engaged in organizing fishing trips do a "full service", i.e., they take care of everything. Since fetching the fishermen at the airport, making the hotel reservations and even providing them with all the necessary equipment. The fishing guide ensures that nothing is left to chance and that the client feels best.