Sportinly Bariloche is a city known for being the epicenter of activities and sports competitions and adventure.

The first days of November is developed the "Adventure Week", an event in which are carried out various activities that revolve around the geography and landscape of San Carlos de Bariloche, including for example kayak, orientatlón and fishing. In addition, these skills are accompanied by cultural and recreational activities.

In this week you can enjoy discounts to travelers in housing and in individual events, highlighting the discounted in accommodation that rounds in 30 percent, more than a tempting offer, especially to go with family and friends. 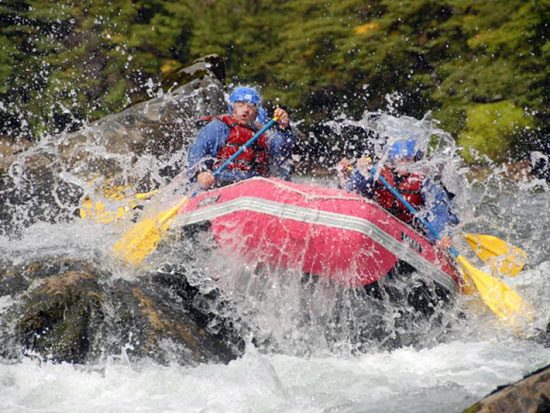 Pure excitement on board the boat when practiced Rafting in Bariloche. Photo courtesy of EMPROTUR.

In 2011 the Adventure Week starts on November 25 under the "Venture" slogan and its main objective is to launch the summer season nationwide. On the 26th and 27th you can enjoy many activities, shows, workshops and classes, while on the 28th it will be held on the Adventure Forum, where intternationally exponents will speak on adventure tourism.

In 2010 took place the following lines of the Week:

The event, held the first week of November, begins with what is called Orientatlón to start the competitors in the sport, which is held in the Club Andino Bariloche. The next day parents and children can enjoy a day in a kayak. There is also a fly fishing tournament, organized by the

Asociación de Pesca y Caza Nahuel Huapi, and during the last 3 days of the week runs a rafting championship was organized by the ATAP.