Provincial Festival of the Gardens takes place in Villa la Angostura during the month of February every year, with an opportunity to visit this beautiful Patagonian city that becomes a colorful dreamy place. 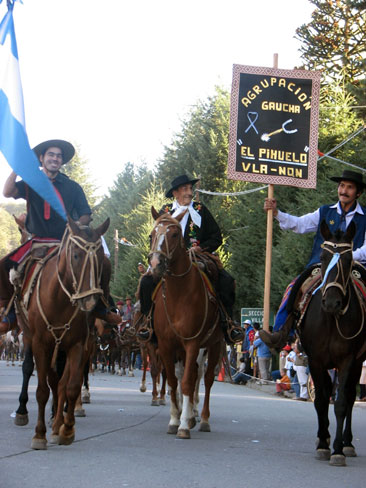 Groups of the region.

The Festival honors the best gardens of Villa la Angotura, which, in addition to the pride of being the most ornate of the city, wins the prize of the elimination of any municipal tax rates.

In the traditional parade of floats you can see the work of the participants showing their floats, flowers, children in bicycle, horse and more. The evenings are filled with street performers of music, circus and theater at the Plaza Los Pioneros, which provides entertainment for the night outdoors and there are artisans selling their work and regional products.

Also on the premises of the Municipal Gymnasium develops an equestrian shows of great interest for those attending the festival. There you can see one of the most anticipated events in popular festivals such as native and tame skills, accompanied by tempting barbecued goat to the software flaw. On the other hand there is a large food court to enjoy other argentine and patagoian typical meals or you can take a souvenir purchased in the promenade of the artisans where there is an exhibition and sale of handicrafts and regional products. 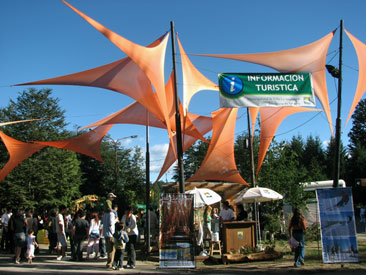 There are stands of the Secretary of Tourism to give information to the tourists.

In 2009 one of the novelties of the event was a mini zoo with a sample of exotic animals that were given as appealing to children.

The festival of the gardens started as an initiative of the Municipality of Villa La Angostura and neighbors interested in the subject who in 1991 decided to start celebrating the annual "Festival of Gardens", declared in 1997 as Provincial Festival through the 2713 decree.

The spirit of celebration is beautify the city with the decoration of the gardens of houses, shops and tourist reception places like hotels, cottages, and more.

Members of the Secretary of Tourism of Villa la Angostura claim that the festival "grows with the community  which through its institutions and a few inspired individuals, groups or families, process and display floats."

It is constituted an evaluation committee that is responsible to pass through all the neighborhoods of the town to select the best gardens. The winners are rewarded with the exemption from fees for services, plants and / or plaques.

The 12th edition of the Festival of Gardens was held from 17 to 20 February with the entire production of Puerto Rock, who organized the festival in 2010.

Besides the prizes for the best gardens in the city, there were stands with lgarden products regional and traditional, there was the parade of floats and, as in previous years, there were lectures, workshops and exhibitions related to gardening.

The artists chosen for this occasion were: Raul Carnota, Leon Gieco and El Símbolo. However, every day there was entertainment for all ages and tastes in music, theater, circus and more.

Every year the goal of the festival is to promote the beautification of the city by the decoration of the gardens of homes, businesses and institutions. A good opportunity to visit the villa that for the month of February is prettier than ever. 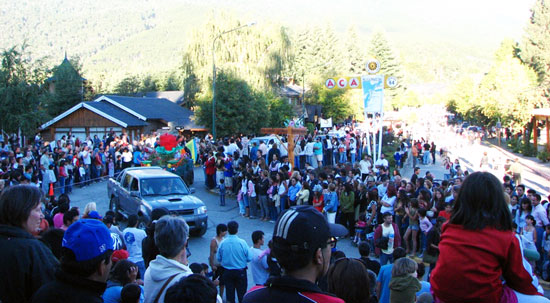 Cerro Bayo, a complete ski center 9 kilometers from Villa la Angostura is the Cerro Bayo Ski Center that has 20 kilometers of slopes.
Correntoso lake and river Near Villa la Angostura is Correntoso River, the shortest river in the world, linking the lake of the same name with Lake Nahuel Huapi.
Coihue El Abuelo and Brazo Última Esperanza From Villa La Angostura you can perform various circuits. Coihue El Abuelo is a maze of coihue cane and following the ride it is Brazo Última Esperanza. These circuits must be done with a guide.
Interest points and trip to Laguna Verde Near Villa La Angostura you can visit the municipal reserve Laguna Verde. On its surface thrive insects and waterfowl while in its depths develop puyén and Patagonian silverside, two protected species.
Santa Ana and Dora waterfalls Waterfalls Dora and Santa Ana with Cerro Mirador and Pantojo are options to visit while in Villa la Angostura.
Scuba diving in lakes Nahuel Huapi and Traful The Agrupación Subacuática Andino Patgónica of Villa La Angostura is a diving school formed to promote this activity. Diving is done in the area of Lake Nahuel Huapi and Lake Traful.
Viewpoints on the Quetrihué peninsula From the port of Villa La Angostura opens the path that runs along the peninsula Quetrihué, an elongated tongue that juts into Lake Nahuel Huapi. There are 12 kilometers, which can be done on foot, by bicycle or on horseback to the forest of myrtle.
Spring and summer in Villa La Angostura Spring and summer are the preferred times of the year to enjoy Villa la Angostura.
Crossing the Andes in classic cars A race crossing the Andes in classic cars is held every year in March in conjunction with the neighboring country of Chile. For three days Argentina and Chile act as hosts to get old cars from around the world.
K 42 mountain marathon in Villa La Angostura Each year the mountain marathon called K42 is held In Villa la Angostura. It runs 42 kilometers from Lake Espejo to the center of the city.
See all Articles