The career of crossing the Andes in classic cars is held every year in March in conjunction with the neighboring country of Chile. For three days Argentina and Chile act as hosts to get old cars from around the world.

It's a unique opportunity in some cases. For lovers of old cars crossing the andes on a classic car is an unforgettable experience.

The cars travel routes by Argentine and Chilean asphalt roads in good condition. The itinerary is scheduled to pass through the automobile museum, the Museum of Moncopulli of the brand Studebaker, largest and most important of the world outside the company that owns in the United States.

Cars that are eligible to participate are those with a minimum of 25 years old and are in optimal conditions of originality.

The race is a traditional type of "hundredths" and self-monitoring with secrets controls, and the route is regularly between Osorno and Villa La Angostura.

Driving skills tests are carried out divided into categories, which are determined by the capacity and age of the car involved and are defined according to the registrants. 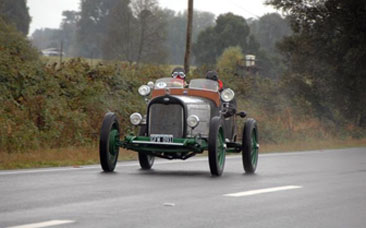 Among the cars that participated in the various editions highlights remembered Studebaker's, Mercedes Benz, Porsche, BMW, Alfa Romeo, Lancia, Jaguar, Cobra, Triumph, MG, Mini Cooper and the legendary Ford Model T and A and others along with national classics of the 1960 and 1970.

The tour starts in Villa la Angostura, where the cars stop for exhibition and are then received by the local authorities in the Congress and Convention Center Arrayanes. In the second stage is a regular section between La Angostura and Huemul Arm on Lake Nahuel Huapi, returning to town, after passing through the Manzano Bay resort and Cerro Bayo.

In the 2008 edition competitors faced the snow that was present at the top of the international crossing. And next year could have the partcicipation of over 60 cars in competition, with scoring for the Patagonian Championship Classic of Regularity Classic and Special. Pilots came from Puerto Montt, Valdivia, Temuco, Osorno Santiago de Chile and the Argentine side, Buenos Aires, Comodoro Rivadavia, Santa Rosa, Bahía Blanca and the provinces of Neuquen and Rio Negro.

Cerro Bayo, a complete ski center 9 kilometers from Villa la Angostura is the Cerro Bayo Ski Center that has 20 kilometers of slopes.
Correntoso lake and river Near Villa la Angostura is Correntoso River, the shortest river in the world, linking the lake of the same name with Lake Nahuel Huapi.
Coihue El Abuelo and Brazo Última Esperanza From Villa La Angostura you can perform various circuits. Coihue El Abuelo is a maze of coihue cane and following the ride it is Brazo Última Esperanza. These circuits must be done with a guide.
Interest points and trip to Laguna Verde Near Villa La Angostura you can visit the municipal reserve Laguna Verde. On its surface thrive insects and waterfowl while in its depths develop puyén and Patagonian silverside, two protected species.
Santa Ana and Dora waterfalls Waterfalls Dora and Santa Ana with Cerro Mirador and Pantojo are options to visit while in Villa la Angostura.
Scuba diving in lakes Nahuel Huapi and Traful The Agrupación Subacuática Andino Patgónica of Villa La Angostura is a diving school formed to promote this activity. Diving is done in the area of Lake Nahuel Huapi and Lake Traful.
Viewpoints on the Quetrihué peninsula From the port of Villa La Angostura opens the path that runs along the peninsula Quetrihué, an elongated tongue that juts into Lake Nahuel Huapi. There are 12 kilometers, which can be done on foot, by bicycle or on horseback to the forest of myrtle.
Spring and summer in Villa La Angostura Spring and summer are the preferred times of the year to enjoy Villa la Angostura.
Provincial Festival of the Gardens Each year takes place in Villa la Angostura "Provincial Festival of Gardens" which rewards the best gardens in the city. Their typical parade of floats deployed all the creativity of the people.
K 42 mountain marathon in Villa La Angostura Each year the mountain marathon called K42 is held In Villa la Angostura. It runs 42 kilometers from Lake Espejo to the center of the city.
See all Articles