A path to the myrtle forest 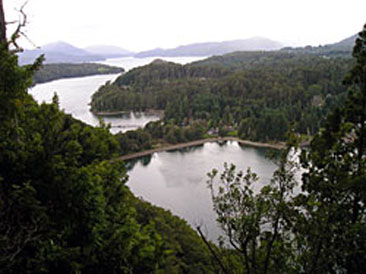 View of the isthmus from Península Quetrihue.

From the port of Villa La Angostura, which is reached from El Cruce through Nahuel Huapi boulevard south, open the path that runs along the peninsula Quetrihué, an elongated tongue that juts into Lake Nahuel Huapi. There are 12 kilometers, which can be done on foot, by bicycle or on horseback to the forest of myrtle. Also you get it from the lake hiring trips in the port.

The vegetation that dominates the peninsula are coihues, lauras, maquis, orchids and vines as mutisia reina (orange) or mutisia vicerreina (purplish), and other beautiful species. 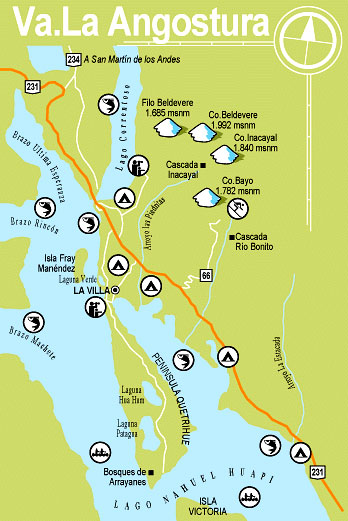 You can also listen the sounds of birds like chucao, ratoneras, rayaditos and cotorras australes.

From the viewpoint, there is a panoramic view of Lake Nahuel Huapi with its arms Machete, Rincon and Ultima Esperanza Bahía Brava, the island Fray Menendez and the mountain range bordering Chile.

It suggests the company of an authorized guide to identify the hills that stand out, existing populations across the lake, the most popular places for fishermen, anecdotes, etc..

Returning to the path to the left and then a short drive to the viewpoints Messidor I and II from which you see Bahía Mansa with the port of Villa la Angostura and the National Park building, the Hotel Angostura, several tourist cabins, Messidors' shelters and a partial view of the Castle Messidor.

Cerro Bayo, a complete ski center 9 kilometers from Villa la Angostura is the Cerro Bayo Ski Center that has 20 kilometers of slopes.
Correntoso lake and river Near Villa la Angostura is Correntoso River, the shortest river in the world, linking the lake of the same name with Lake Nahuel Huapi.
Coihue El Abuelo and Brazo Última Esperanza From Villa La Angostura you can perform various circuits. Coihue El Abuelo is a maze of coihue cane and following the ride it is Brazo Última Esperanza. These circuits must be done with a guide.
Interest points and trip to Laguna Verde Near Villa La Angostura you can visit the municipal reserve Laguna Verde. On its surface thrive insects and waterfowl while in its depths develop puyén and Patagonian silverside, two protected species.
Santa Ana and Dora waterfalls Waterfalls Dora and Santa Ana with Cerro Mirador and Pantojo are options to visit while in Villa la Angostura.
Scuba diving in lakes Nahuel Huapi and Traful The Agrupación Subacuática Andino Patgónica of Villa La Angostura is a diving school formed to promote this activity. Diving is done in the area of Lake Nahuel Huapi and Lake Traful.
Spring and summer in Villa La Angostura Spring and summer are the preferred times of the year to enjoy Villa la Angostura.
Provincial Festival of the Gardens Each year takes place in Villa la Angostura "Provincial Festival of Gardens" which rewards the best gardens in the city. Their typical parade of floats deployed all the creativity of the people.
Crossing the Andes in classic cars A race crossing the Andes in classic cars is held every year in March in conjunction with the neighboring country of Chile. For three days Argentina and Chile act as hosts to get old cars from around the world.
K 42 mountain marathon in Villa La Angostura Each year the mountain marathon called K42 is held In Villa la Angostura. It runs 42 kilometers from Lake Espejo to the center of the city.
See all Articles