The coasts in this part of the world mean engaging blue sea, cliffs sometimes, flat beaches, and above all, unique marine wildlife reserves in the world. Since the summer tourist resort of Las Grutas, in the north to what is the southern end of the world, Ushuaia, there are hundreds of kilometers to go and see. 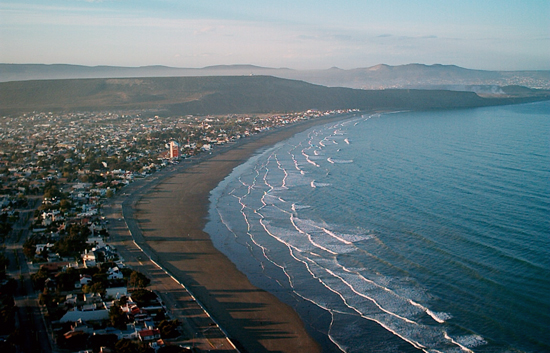 
Besides tourism, the coast of Patagonia have an economy based on fishing and oil, which is support of many people in southern Argentina, as in the city of Comodoro Rivadavia. Just 10 km of this town is the southernmost beach in the American mainland, Rada Tilly, which has 2.5 km of sandy beaches.

In the province of Chubut, there also are the beaches of Puerto Madryn, touristic destination by excellence in the Patagonia because of its proximity to Peninsula Valdés, and Playa Unión, the resort of all the lower valley of Chubut river a few kilometers from Rawson.

But without a doubt, the beach convener for its warm, compared to those of Chubut that are cold, is Las Grutas. This resort attracts thousands of tourists each summer from all over Argentina and neighboring countries who venture to explore the Patagonian coast. Nearby we find the town of San Antonio Oeste and the deepwater port San Antonio Este.

A destination that is growing but is of incomparable beauty is Playas Doradas in the province of Río Negro. Its fine sands and long beaches make this an unforgettable place. And finally, it's worth mentioning El Cóndor, the capital of Río Negro resort.

Finally, it's important to mention the coastal cities of the province of Santa Cruz, although they are not resort villages, they are located on the Atlantic coast. Most of them grew up around trade and communication ports. Among these locations can mention Puerto Santa Cruz, Puerto San Julián, Caleta Olivia and Puerto Deseado.

Museums in the Atlantic coast of Río Negro Three different museums proposes the city of San Antonio Oeste and the Port of San Antonio East to learn the history and culture of the region.
San Antonio Oeste: a fishing town 1San Antonio Oeste is a small town dedicated to commercial fishing. In recent years it has grown thanks to its location near the deepwater port, and Las Grutas the largest beach destination in Patagonia.
Activities and tours in San Antonio Oeste From meeting fisheries, to observe the sea lions of the harbor and gather oysters. These are just some of the options available to the visitor in San Antonio Oeste.
Port of San Antonio Este The Port of San Antonio Este is one of the busiest in Patagonia. From this deep-water port, big ships carry famous apples and other fruits from Río Negro to worldwide destinations.
Tourists attractions in San Antonio Oeste Attractions to visit in the city of San Antonio Oeste. Sea lions, the harbor, the beaches and more in this coastal town of Patagonia.
Tournament The 6 Hours of Silverside The city of San Antonio Oeste holds every October a competition that brings together local fishermen eager to conquer good specimens of silverside. This is the fishing tournament "The 6 Hours of Silverside".
Rawson: the capital of Chubut 3Rawson is a small town living to the rhythm of public agencies of the government of the province of Chubut.
Playa Unión Playa Unión is a beautiful beach that in summer offers the opportunity to enjoy the sea. You can also surf and windsurf as see Commerson's dolphins and fish.
Places to visit in Rawson The capital of Chubut, Rawson, offers different places to know all the details of it, from its history, fauna, flora and population.
Whale Vigil in Puerto Pirámides The arrival of the whales to the cost of Patagonia is a unique experience. For four consecutive years, this is done through a live broadcast via the Internet and television called the Whale Vigil.
See all Articles