Comodoro Rivadavia, since its inception, was linked to Italian immigrants. The need for an output port for agricultural products like it is today Sarmiento, made Francisco Pietrobelli explore the region since 1897 and decided on a place 10 kilometers from Rada Tilly. 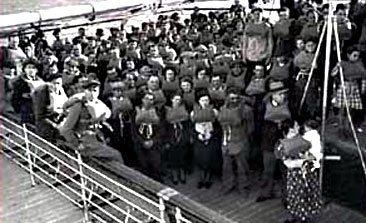 Hundreds of italians came to Comodoro although they were not the largest inmigrant group that arrived in the city.

After the port was used as a boarding area and decrease in merchandise in 1901, the Executive officially founded the town of Comodoro Rivadavia.

Pietrobelli had come north of Chubut (Puerto Madryn) in 1888 along with other fellow to work on the railway works of Chubut. Then he associated with a group of Welsh to explore and colonize the valleys of the Andean regions. This was traveling the province to the port for consolidation of their interests.

Graciela Ciselli regional historian explains that "with the discovery of oil is produced the first great wave of Italian immigrants."

Contrary to what you might guess, the immigrants that came weren't in poverty and misery, as these same circumstances would preclude the purchase of passenger boarding.

"The reasons lie in the instability of Italian politics, class differences and fear of war. At that time the Austro-Hungarian dispute with Italy's northern peninsula," says Ciselli.

Another important moment in the Italian immigration to Comodoro Rivadavia extends between 1947 and 1960. The government of President Perón pushed an immigration policy that was overflowing by the number of European travelers.

The postwar period prompted many workers, including professional-technical level to leave their home countries because of the high unemployment and crises of all kinds that were in Europe.

Since the beginning of the century the Italians were related to trade and skilled jobs. While large commercial houses like Lahusen and La Anónima dominated the region, some immigrants were associated with them as managers and business managers.

Around 1920 the Italian immigrants were the third set of numerical importance, after the Spanish and Argentine.

"However, we know that hundreds of Italians arrived, though not as much as is sometimes assumed knowing that, in general, is less than fourth in quantity, unlike other areas of the country as Buenos Aires and Santa Fe, where they form the majority group", says Ciselli.

The largest wind park in the continent is in Comodoro Rivadavia The wind is constant in this city and its people took advantage of it by building the largest wind park in South America. It is a park with windmills that collect air currents and convert them into clean energy.
Wind Buggies Pablo Reyes is the head of the Wind Buggy School in Rada Tilly. He wants this sport to become as popular as it is in other countries.
The oil myth 2Comodoro Rivadavia life is connected to the oil production. Its history, its people, museums and tours talk about growth through the black gold.
The Bolivian People in the Fair of the Communities The different communities are represented every year at the Fair of the Communities in Comodoro Rivadavia, among which is the Bolivian Residents Association.
The beaches of Rada Tilly A beach were you can enjoy the sea and the landscapes from the lookouts 160 meters above sea level.
The port as an engine of economic grouth Comodoro Rivadavia is easily identified as an oil region, but fishing is also centered in its large sea port.
Comodoro Rivadavia has a Classic Car Club The Classic Car Club is a group of enthusiasts who organize regular competitions in the area.
Tourists for a day A new proposal for residents and tourists of Comodoro Rivadavia is to see all its attractions for free.
Museums in Comodoro Rivadavia Comodoro Rivadavia has several museums that tell the history, culture and economy of the town. Tourists can tour the various facilities to learn about everything related to this oil city.
The Oil Production Circuit Explained Through this circuit you can learn about the production of oil. The National Petroleum Museum in one of the largest in the world.
See all Articles