Antonio Morán Wind Park is in Cerro Arenales about 17 km from the center of Comodoro Rivadavia and 400 mts. above the sea level. It is literally a park with large windmills. Arranged in an orderly way and rising like giants on the ground these collected large air scoops that never stops running here.

Like this,through wind, mills generate a type of energy which, by its nature, is considered the future energy: wind power. Why the future? Because, unlike other resources that are being depleted and whose exploitation can cause environmental impacts, such as oil or water, the wind generates renewable energy and produces no pollution whatsoever. The park that has been built here is, so far, the largest in South America.

Thus, as the town of Comodoro Rivadavia say:

"The wind park will generate healthy energy for the environment, and will produce renewable energy and clean, avoid the use of renewable fuels, the emission of pollutants into the atmosphere and work with the International Programme on Global Climate Change, and hence the greenhouse effect, according to the requirements of the Climate Treaty, in the Earth Summit in 1992".

In addition, because of their rarity, the mills on the hill Arenales are a tourist attraction in the city of Comodoro. The grandeur of these giants catch visitors who come here. 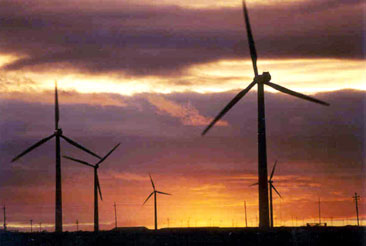 Windmills stand up like giants in the Arenales hill in Comodoro Rivadavia.

The first windmills were installed in this park in January 1994, through a private venture. They had 250 KW each, and also became the first of its kind in the country and the continent.

In 1995, imposes on the grounds of the wind park the name "Antonio Morán". And in 1997 the People's Cooperative Society Limited was again a pioneer in signing a Major Wind Park of South American continent with the assembly of 8 machines of 750 KW, each totaling 6,000 kW of installed capacity that is added to the 500 KW that already exist.

More recently, in 2000, an agreement was signed for the installation of 16 windmills more. Also of 750 KW each.

Some technical characteristics of the wind turbine are:

Wind Buggies Pablo Reyes is the head of the Wind Buggy School in Rada Tilly. He wants this sport to become as popular as it is in other countries.
The oil myth 2Comodoro Rivadavia life is connected to the oil production. Its history, its people, museums and tours talk about growth through the black gold.
The Bolivian People in the Fair of the Communities The different communities are represented every year at the Fair of the Communities in Comodoro Rivadavia, among which is the Bolivian Residents Association.
The beaches of Rada Tilly A beach were you can enjoy the sea and the landscapes from the lookouts 160 meters above sea level.
The port as an engine of economic grouth Comodoro Rivadavia is easily identified as an oil region, but fishing is also centered in its large sea port.
Comodoro Rivadavia has a Classic Car Club The Classic Car Club is a group of enthusiasts who organize regular competitions in the area.
Tourists for a day A new proposal for residents and tourists of Comodoro Rivadavia is to see all its attractions for free.
Museums in Comodoro Rivadavia Comodoro Rivadavia has several museums that tell the history, culture and economy of the town. Tourists can tour the various facilities to learn about everything related to this oil city.
Italian immigrants in Comodoro Rivadavia Italian immigrants arrived in Comodoro Rivadavia looking for work in the railway and soon became an important force in the community.
The Oil Production Circuit Explained Through this circuit you can learn about the production of oil. The National Petroleum Museum in one of the largest in the world.
See all Articles