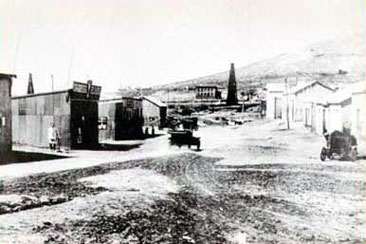 Comodoro Rivadavia city officially born in 1901 through a decree of the Executive Branch. It's 160 kilometers far from Lake Muster, on whose banks the agricultural colony "Ideal" was located, the current town of Sarmiento. The natural springs supplied Comodoro, but were insufficient to quench the thirst of the population.

So in 1903 the Bureau of Mines, Geology and Hydrology of the National sent to Comodoro a drilling machine which, after reaching the 172 meters, gave up. In 1906 landed in the city a new machine to find water, a Fauck equipment brought from Germany by July Krause, head of the Bureau of Mines Office. The drill was located about three kilometers north of Mount Chenque, as indicated by the previously conducted soil studies. In March 1907 began drilling.

Among the workers were José Fuchs (Fucks, actually) and Humberto Beghín, both coaches have come from Germany. It took several months of fruitless attempts. It was 500 meters underground, but no water flowed. Krause gave the order to pass the limit of the machine. On December 12, 1907 began to spred an oily liquid, bubbling, smelling of kerosene. 13, when it reached 540 meters deep, confirmed the existence of fuel. National Petroleum Capital was born.

Popular memory, fed by the media, kept this vision alive on the chance discovery of oil. But from a scientific point of view this story is not accepted.

Since 1904 the government was doing geological and mineralogical survey conducted in different regions of the country, explains Graciela Ciselli in her investigation "Italians to southeastern Chubut", since the late nineteenth century is explored different regions of the country in search of minerals, to which were acquired abroad drilling machines and apparatus for that purpose probing.

The mining engineer Enrique Hermitte, who was in charge of the Bureau of Mines, Geology and Hydrology in 1904 said, years later, that

"The discovery of oil in Comodoro Rivadavia is a consequence, if not directly, at least mediate of the superior decree of October 1904 provides for the establishment of Geological and Economic Map of the Republic and the way they faced his resolution."

For their part, historians from Neuquén Orietta Favaro and Marta Morinelli, in her book "Oil, state and nation", speak of the "founding myth of Argentina's oil exploitation," the casual discovery in Comodoro Rivadavia. Through their work, the researchers showed that the finding was deliberate and targeted, this does not exclude at the same time fetching water. 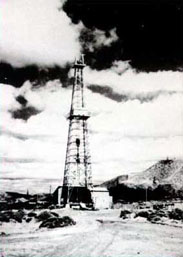 Also they cited Hermitte, when he states that have confused the facts relating to discovery of oil, attributing its discovery to chance,

"When in reality it was just good luck for those who study the subsurface implanted deeply convinced that one day should contribute to economic development at rates comparable to agriculture and livestock ...".

Since the last decade of the nineteenth century knew of fuels existance in the Patagonian soil. In 1890 and 1895 Moreno was 15 kilometers south of Comodoro Rivadavia, in the present town Rada Tilly, and made it clear that this area would boost its ports or the exploitation of kerosene.

Moreover, the writer from Comodoro Asencia Abeijón made references  in his chronicles of the indigenous people lit their fires easily with the help of tar.

The truth is that in the framework of a national subsurface mineral exploration, moved to Commodore German drilling equipment, german drilling technicians were hired (Fucks, Beghín), and once reached the depth limit of the machine ( 500 m), Beghín received a telegram ordering him to

"... In camp to get to five hundred meters which is the power of the machine, it reinforces the issue and work carefully to avoid accidents ...". Researchers suspect that they are too uncomfortable issues to go looking for water only.

So that once tied the loose ends of Argentina oil history, historians infer that the slogan of the work in 1907 was "Water Search and find oil," which gives ground to the image of the accidental discovery of hydrocarbons in Comodoro Rivadavia.

The largest wind park in the continent is in Comodoro Rivadavia The wind is constant in this city and its people took advantage of it by building the largest wind park in South America. It is a park with windmills that collect air currents and convert them into clean energy.
Wind Buggies Pablo Reyes is the head of the Wind Buggy School in Rada Tilly. He wants this sport to become as popular as it is in other countries.
The Bolivian People in the Fair of the Communities The different communities are represented every year at the Fair of the Communities in Comodoro Rivadavia, among which is the Bolivian Residents Association.
The beaches of Rada Tilly A beach were you can enjoy the sea and the landscapes from the lookouts 160 meters above sea level.
The port as an engine of economic grouth Comodoro Rivadavia is easily identified as an oil region, but fishing is also centered in its large sea port.
Comodoro Rivadavia has a Classic Car Club The Classic Car Club is a group of enthusiasts who organize regular competitions in the area.
Tourists for a day A new proposal for residents and tourists of Comodoro Rivadavia is to see all its attractions for free.
Museums in Comodoro Rivadavia Comodoro Rivadavia has several museums that tell the history, culture and economy of the town. Tourists can tour the various facilities to learn about everything related to this oil city.
Italian immigrants in Comodoro Rivadavia Italian immigrants arrived in Comodoro Rivadavia looking for work in the railway and soon became an important force in the community.
The Oil Production Circuit Explained Through this circuit you can learn about the production of oil. The National Petroleum Museum in one of the largest in the world.
See all Articles