"Wind power and hydrogen can converted Comodoro Rivadavia and Patagonia into the Kuwait of the twenty-first century", said the former governor of Chubut Lizurume at the opening of 16 new windmills at the wind farm back in August 2000, adding 26 in total. Will such a claim come true?

For now, with Antonio Morán Wind Farm located on the Cerro Arenales 17 km from the city center, Chubut is at the forefront nationally in wind energy is concerned. One type of energy that until recently was considered laboratory even in Europe, and today, in that continent has thousands of spinning mills to generate it.

Setting the pace faster than expected, wind energy in Patagonia is overcoming obstacles as advances that occur indefinitely. Grows despite conflicting interests and resistance to change by the development of conventional energy from renewable resources such as oil and gas. Comodoro is a paradox that the windmills and the iconic rocker that pumps oil from the bowels of the earth, share the same hill, Arenales. 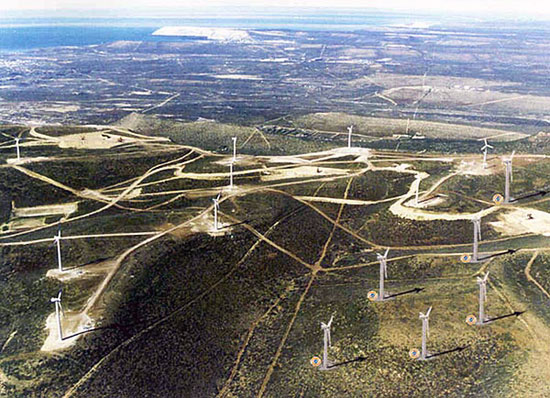 View of the winf farm with its 26 wind mills in the Arenales hill.

Interestingly, in that act, was the president of the Argentine Institute of Oil and Gas, Engineer Oscar Secco, who articulated a paradox when he ruled that

"The oil industry is inherently unsustainable and in turn ... it made an invaluable contribution to the global economy and comfort of human beings. Today the big oil companies are bound to make an inexorable transition to cleaner forms of energy. They're betting on hydrogen, while the gas have been prioritized on oil. "

The agreement signed at the opening for the supply, installation and commissioning of 16 new wind turbines sat engagement between the People's Cooperative Society Ltd (SCPL) of Comodoro Rivadavia and Gamesa of Spain.

Furthermore, the Center for Non-Conventional Energy Research was opened aimed at forming a joint organization to investigate, develop and implement economic enterprises for the region for the production of non-polluting forms of energy, and the program of scientific and technological activities for their implementation and dissemination in order to form a homogeneous group of people able to engage in a higher development embedded in the community to promote alternative energy and progress in implementation.

It was not the State that originally created the minimum conditions for the investor could take risks so expensive in its commitment to wind power, but a cooperative (Cooperative Society Ltd People). The capital was the money from users, a strategic alliance with the manufacturer of those first two mills-installed on top of Cerro Arenales 1992, and a financial institution in Denmark.

When they reached the port of Comodoro Rivadavia from faraway Denmark, successive mills, the representative authorities and officials began to envision the need to legislate for the benefit of this type of generation. Laws were enacted to promote wind and solar energy at the provincial and national levels. Up to now in the Energy Secretary is committed to supporting small and medium industries with international cooperation programs.