Since 2009, Comodoro Rivadavia has a new attraction for all visitors. This is the Coastal Marine National Park, created by Law 26,446, which occupies the northern coast of San Jorge Gulf and adjacent marine area between Cabo Dos Bahías and Quintano island, southeast of the province of Chubut. It is located between the cities of Camarones and Comodoro Rivadavia and has more than 100 km square. 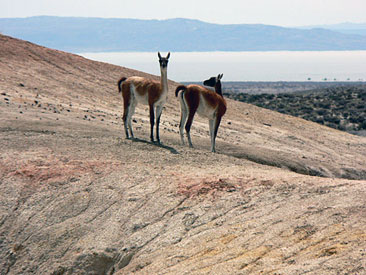 If we consider the environmental point of view, the area of ​​San Jorge Gulf is very rich because it has what the birds and marine mammals wish. Bays, inlets, coves, beaches, sandbars and coral rock islands form a landscape that give them the necessary protection for nesting between September and March.

This habitat hoards one of the largest concentrations of wildlife on the planet, from which you can find numerous species of seabirds. You can observed always wanted Magellanic penguins, cormorants, skuas, giant petrels, kelp gulls, oystercatchers, steamer ducks and egrets. Moreover,in  its waters walk the Commerson's dolphins and the shores are guarded by sea lions and herds of guanacos.

On the other hand, in this place, besides the normal flora of the steppe can be found curious algae groups concentrated in certain areas, such as "forests" of cayiyuyo underwater and other green, brown and red species that are economic livelihood for the inhabitants of coastal villages and fundamental part of the food chain.

The new park is posited on two main objectives:

The natural wealth of the gulf and the incredible landscapes that invite you to be discovered, are an opportunity to exploit the tourist side of the region. But this development is planted on a sustainable basis and with respect for nature, what is not allowed to visit mass tourism, but the park is managed with a defined public infrastructure and services as less invasive as possible.

You can tour the coastal park by land, sea and air. One of the most interesting circuits is going the way of the former Provincial Highway No. 1 out of Caleta Córdova. During this tour of the coastline crossing from sedimentary formations alternating shades of red and yellow cliffs and gullies due to erosion, to wide sandy expanses. 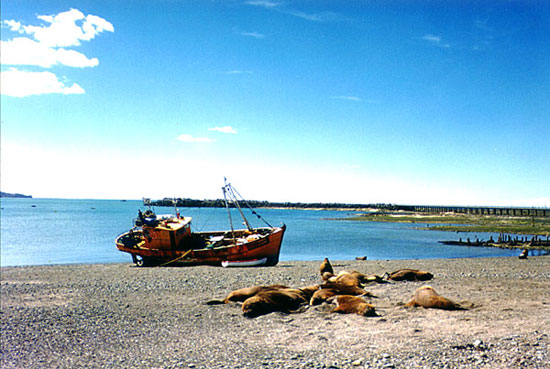 Sea lions resting in the coasts of the Coastal Marine National Park.

A few kilometers later we find two small towns, Bahía Bustamante and Camarones, which are almost entirely dedicated to fishing and exploitation of algae. There you can hire sailing excursions to explore the sinuous lines where the waves break against the rocks and are the perfect place for penguin, sea lion colonies and cormoran rookery. These sites include Cabo Dos Bahías, Caleta Hornos, Isla Leones with its old lighthouse, Bahía Melo, Cabo de Matas, Bahía San Gregorio and Caleta Sara.

Adventure cruises in 4x4 vehicles, motorbikes or bicycles are ideal on these uneven terrain, and the charm hidden under the surface of the sea transformed the place into a mecca for divers.

But undoubtedly the most original proposal is to observe the area from the air, hiring a flight on the flying club of Comodoro. The flight lasts two hours where you can take a screenshot of this new attraction in Patagonia Argentina.

The park is the first to implement a model of shared management between a province and the nation through the National Parks Administration. 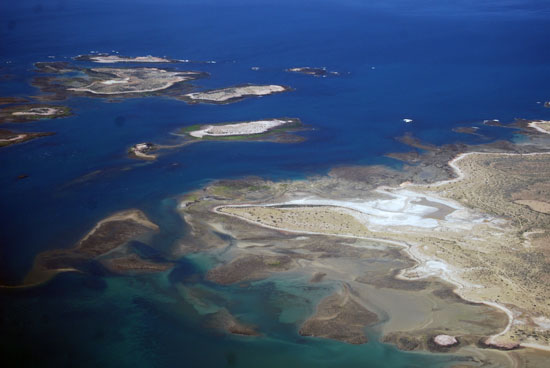