Night trekking: walking by the light of the moon in General Roca See map

Patagonia is characterized by a diversity of landscapes that impact tourists. The particularities of the bards that are in the area of ​​Paso Córdoba are conducive to the practice of recreational activities on the environment.

Walking along the paths of the cliffs by the light of the moon and observe the flora and fauna is an interesting excursion for visitors that come to General Roca.

The night trekking allows you to discover a vantage point from where you can see a strong contrast between the valley, the steppe of Patagonia, the river, the city of General Roca and north bards.

This activity takes place once a month or every twenty days when the moon is full and is part of the "adventure ecotourism" project, proposed by the management of tourism in the city. 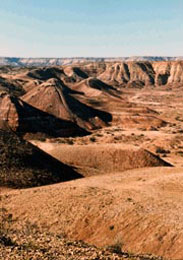 Valley of the Moon, daylight

The walk begins sunset when the lights disappear from the "Bjada de los Caballos" in the protected area of ​​Paso Córdoba and walk the trails surrounding geological formation that attracts thousands of visitors in all seasons.

Claudio Paz is the tour guide for this adventure and argues that it is a competition, but the goal is to know and enjoy the scenery. As the trek begins from a lowering of the bard, during their long downward, making it a sport for anyone who is interested.

The departure time is modified according to the season in which they performed in summer begins at 9pm and in winter at 7pm.

Tourists can see the various shapes of the stones found in the canyon and see the "Valley of the Moon" which is part of the bard, which thanks to the erosion of the centuries, wind and rain made it a rather unusual appearance.

During the three or four hours of walking, visitors arrive at the riverbank, they know the famous labyrinth of the "Cañadón del Náutico", where the locals received them with a great stove.

In the night trekking can be seen birds like eagles, swallows, partridges, vultures, who are the visible part of the wildlife that has adapted to the dry climate.

For tourists the local flora is very interesting. Despite its desert aspect, these plants are those that give beauty to the landscape as jarillas, alpataco, coirón, jume, cat's claw, Zampa, colapiche, cactus and molle.

In this sport not only you get to know the landscape with its impressive history, but games are made for integration among the visitors. After traveling four kilometers tourists enjoy a "asado" in the middle of the bards, under the moonlight and breathe the warm air that allows them to rest from the noise of the city.

People who want to participate in the trekking night must wear comfortable shoes, bring water, a flashlight and a coat.

Besides trekking, in the bards are practiced in different activities such as mountain biking, paragliding, abseiling, fishing and water sports such as rowing and rafting descents.

National Apple Festival 2Each february General Roca lives a new edition of the already famous National Apple Festival.
The irrigation channel and its parks The secondary irrigation canal runs through the center of General Roca, and the squares on its banks are the perfect site for hiking, hanging out with friends or just having a moment of relaxation.
Vuelta de la Manzana Rally "Vuelta de la Manzana" Rally is organize every year by the Drivers Association of General Roca (AVGR). Is one of the most important automotive events in Patagonia and in Argentina.
Museums in General Roca There are many museums in General Roca. They are good places to learn about history and art of the city.
Through the Negro River shores Throughout the coastal area of ​​Negro River there are places of great beauty for camping, water sports, fishing or recreation
Ninquihue Social Project for the children of the streets Project Ninquihue of General Roca is a project for the kids in the street. It tries to give them containment and a new way of living. In this project many institutions of the city and province join efforts.
Paragliding in General Roca, a look from the sky 3There are several people who practice paragliding in the hills near General Roca. Also you can take courses.
Casa de Piedra: a weekend option from General Roca The reservoir Casa de Piedra is located on the border between the provinces of La Pampa and Río Negro, along the Colorado River and 110 kilometers from General Roca. Ideal for a weekend of resting.
The apple route A tourist circuit to learn about fruit production, the colorful surroundings of General Roca and its history through visits to barns, farms, wineries, museums and monuments.
Patagonian Museum of Natural Science The Patagonian Museum of Natural Science in General Roca is a place where you can learn about the dinosaurs of Patagonia.
See all Articles