The area of Puerto Deseado was sighted by the Spanish for the first time in 1520. At that time, Magellan's expedition called it Bay of Forced Labor.

In 1586 was named Deseado and since then countless expeditions arrived at the port. However, permanent settlement would not occur until July 15, 1884, when Captain Antonio Oneto arrived on these shores with the aim of founding a colony.

Finally, in 1905 was located what is the current plan of the city of Puerto Deseado. Four years later, in 1909 it was begun to build a railway line intended to reach the lake Nahuel Huapi, in the province of Río Negro, but only arrived in Colonia Las Heras, to 286 kilometers from its starting point.

Deseado is a beautiful city of cliffs and port surrounded by a steppe that is broken by small hills in the north of the city. It is on the northeastern coast of Santa Cruz in the Patagonia, overlooking the Atlantic Ocean. Deseado river runs through it and ends in an ria in the sea, called San Jorge Gulf.

The climate in the area ranges in the strip that goes from warm to cold, being wetter in winter than in summer. 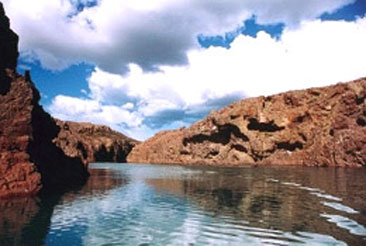 A tour by the canyons in the surroundings is a good option when touring.

For this city of just over 8,000 inhabitants, one of its main economic driver is the port, which is, in turn, the most important of the coast of Patagonia. Since its inception in 1928, the port has gone through periods of great activity and stagnation alike. In its moments of greatest movement for oil import inputs of great importance to the region and for meat and wool export. Since 1983, Patagonia fishing boom and a regimen of doing special promotions are reviving the sector.

The most important social event of the year in Puerto Deseado is the pilgrimage to the Grotto of Lourdes, which speaks of the deep Catholic tradition of this city. Another important event is the Shark Fishing Contest. 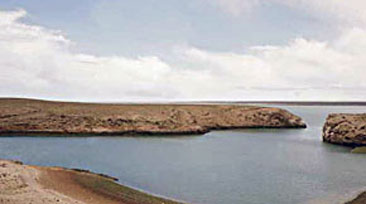 The greatest attraction lies in the marine life that inhabits the place that makes Puerto Deseado and its surroundings an area of ​​international appeal. Deseado ria is also a unique place worth visiting. Other attractions include the Grotto of Lourdes, the Corbeta Swif (the remains of a ship that sank more than two centuries ago), the Jaramillo Petrified Forest, the Pájaros island and the canyons that surround the town.