The city of Villa La Angostura is characterized for being:

This is Villa La Angostura, a resort in the province of Neuquén, a few kilometers from Bariloche and San Martin de los Andes that by the characteristics, has become in recent years in the destiny for more people. 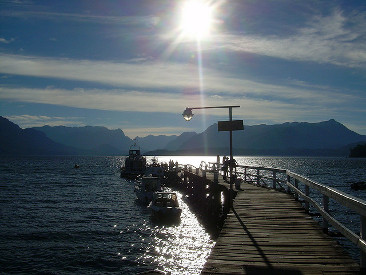 The town was founded on May 15, 1932 and is named for being located in the thinnest part of the peninsula Quetrihué in the heart of the Nahuel Huapi National Park. Disney visited the area for decades and say he was inspired by the Myrtle Forest (located a few kilometers from town) and its surroundings to create and film the movie "Bambi".

Beyond that, the truth is that until a few years ago the town was only a stopover in the way to Chile or the Lagos Corridor. However, over time, particularly landscape and nature here almost intact as millions of years caught the tourists who opt to choose the city as their destination.

Today its population is around 10,000 inhabitants, of whom, according to county reports, 90 percent of them has any work related to tourism. Also increased significantly the number of beds, with more than 2,000 beds actually.

The arrival of the rich and famous ,Argentines and foreign businessmen, actors and even some representatives of European royalty, began to circulate over the name of Villa La Angostura in the media, and thus helped to grow tourism in the same .

But beyond that, there is something that distinguishes it from other locations in the mountain range. La Angostura lavishes a rigid respect for nature, convinced that its almost untouched nature has led her to have such a distinguished tourism portfolio, so it is ready to keep it against all odds.

There are several times that the residents, professionals and businessmen complained and managed to close the construction of different facilities because they were damaging nature through deforestation. So also were the same neighbors in the village that prevented authorizing the practice of jet skis and water skiing on Lake Correntoso.

In addition, La Angostura has ordinances intended to keep the planning at random. Can only be built with stone and wood, and the division of the lot is under control of the municipality. Interestingly, is this characteristic which attracts capital.

Besides touring the streets of this quiet and beautiful town of Neuquén, you can make a bike ride, hike or horseback to the Quetrihue peninsula, where is the Myrtle Forest.

In winter you can ski and do other winter sports in the Cerro Bayo, although summer is a good choice to visit.

In hot weather, the Lake Nahuel Huapi invited to lie on its banks to sunbathe or do water sports.

It's also good to consider traveling by car or bike along Route Siete Lagos, where you can camp, visit Bariloche, or cross into Chile by the borderline Cardenal Samore.

Waterfalls Santa Dora and Ana are interesting to visit, as well as the coihue El Abuelo.

Fishermen will find a good place on the lake and river Correntoso.

Cerro Bayo, a complete ski center 9 kilometers from Villa la Angostura is the Cerro Bayo Ski Center that has 20 kilometers of slopes.
Correntoso lake and river Near Villa la Angostura is Correntoso River, the shortest river in the world, linking the lake of the same name with Lake Nahuel Huapi.
Coihue El Abuelo and Brazo Última Esperanza From Villa La Angostura you can perform various circuits. Coihue El Abuelo is a maze of coihue cane and following the ride it is Brazo Última Esperanza. These circuits must be done with a guide.
Interest points and trip to Laguna Verde Near Villa La Angostura you can visit the municipal reserve Laguna Verde. On its surface thrive insects and waterfowl while in its depths develop puyén and Patagonian silverside, two protected species.
Santa Ana and Dora waterfalls Waterfalls Dora and Santa Ana with Cerro Mirador and Pantojo are options to visit while in Villa la Angostura.
Scuba diving in lakes Nahuel Huapi and Traful The Agrupación Subacuática Andino Patgónica of Villa La Angostura is a diving school formed to promote this activity. Diving is done in the area of Lake Nahuel Huapi and Lake Traful.
Viewpoints on the Quetrihué peninsula From the port of Villa La Angostura opens the path that runs along the peninsula Quetrihué, an elongated tongue that juts into Lake Nahuel Huapi. There are 12 kilometers, which can be done on foot, by bicycle or on horseback to the forest of myrtle.
Spring and summer in Villa La Angostura Spring and summer are the preferred times of the year to enjoy Villa la Angostura.
Provincial Festival of the Gardens Each year takes place in Villa la Angostura "Provincial Festival of Gardens" which rewards the best gardens in the city. Their typical parade of floats deployed all the creativity of the people.
Crossing the Andes in classic cars A race crossing the Andes in classic cars is held every year in March in conjunction with the neighboring country of Chile. For three days Argentina and Chile act as hosts to get old cars from around the world.
See all Articles