The National Petroleum Museum of Comodoro Rivadavia exhibits the history of oil since its formation millions of years ago and its exploitation and industrialization at present, with particular emphasis on the epic of discovery in this city. 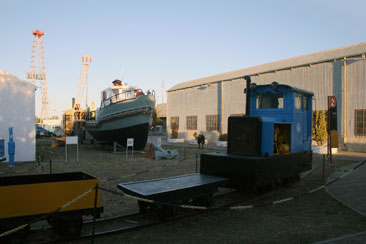 In the Internal Sampling located in the main building you can tour the "Time Tunnel", which details life in chronological order of the universe. The sequences are from the Big Bang to the present.

The origin of life, the evolution of dinosaurs from which fossils can be observed-the formation of oil and the location of the different basins of Argentina, are the leitmotif of the exhibition. Then you observe documents and photographs related to the discovery of oil in Comodoro Rivadavia, the constitution of Oilfield Fiscales (YPF) and the stages in the processing, transportation and marketing of products.

The courtyard of the museum has the External Sampling, where you can oberve the different phases of the oil industry through the exhibition of valuable pieces such as machinery, equipment and tools of the beggining century.

In the center of the courtyard is the historic site where the drilling equipmentNo. 2 discovered kerosene on December 13, 1907. They built around an amphitheater for outdoor performances, concerts and other cultural activities. Also are offer short courses "English for the traveler," "Prehistoric, tourism and museum" and "Paleontology," among others.

The National Petroleum Museum is considered the only one of its kind in Latin America. It shares the same characteristics with museums of Russia, the United States and Canada. Therefore, it is one of four oil specific museums in the world's, and because of its specific subject, is a Museum of Science and Technology.

It opens from Tuesday to Sunday from 8am to 6pm, on Calle San Lorenzo No. 250 Barrio General Mosconi, three kilometers north of downtown.

History of the Museum 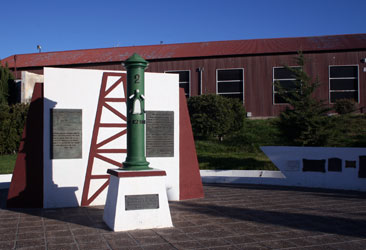 The Petroleum Museum was created in the '80s, when Oilfield (YPF) decides to realize his own museum to avoid "the lost of the testimonies of the struggles and sacrifices of those that  with commendable patriotic spirit, defended and preserved for the nation's wealth that springs from the very heart of the historic desert in December 13 1907".

Thus, the May 26, 1987 YPF issued Resolution No. 344 to support fully the creation of eventually known as the National Petroleum Museum, choosing Comodoro Rivadavia as the city for its location as being "rooted in the origins the discovery of hydrocarbons in the national territory".

The inauguration took place on December 13, 1987, to commemorate the 80th anniversary of discovery of oil. It direction, until 1992, was in charge of Humberto Beghín, son of one of the pioneers in the oil business.

Since 1992, in time of privatization, YPF decided to close several offices incumbent to its Board, including the museum, which is transferred in August 1993 at the Universidad Nacional de la Patagonia. In April 1997 through 24 799 national law is declared "a site of cultural and historical interest."

At present, the National Petroleum Museum orbits under the Ministry of Science and Technology and has the direction of Prof. Graciela B. Ronconi. Furthermore, they are designing some changes in the sampling through a grant received from the Ministry of Science and Technology of the Nation for the project "Renovation on sampling at the National Petroleum Museum" ASETUR `09. The idea is to make the museum more dynamic, fun and technological innovation to express the identity and the development of the oil industry and socio-cultural area.