Going to Comodoro Rivadavia can be an adventure. The flat Patagonian plateau is transformed into chains of hills that form strong winds canals. The hills have forced a whimsical drawing of urban geography and the center of the city is several kilometers after finding the first neighborhoods. 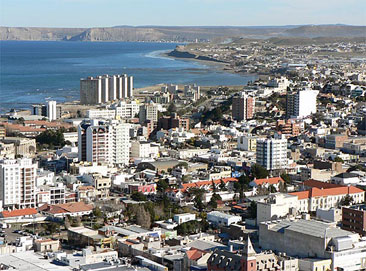 Comodoro Rivadavia: one of the most populous cities in Patagonia.

Oil city par excellence, along with the city of Neuquén, the most populous of Patagonia. It was founded on February 23, 1901 as output shipping of agricultural production and livestock of Colonia Sarmiento and San Martín. A colony of "Boers" (South African farmers) received political asylum in our country and ended up in this land, struggling with a lot of sacrifice and fighting spirit for growth.

That is how a great variety of immigrants (Italians, Spanish, Portuguese, Welsh, Polish, Chilean, Bolivian) in addition to internal migrants, formed this particular idiosyncrasy.

But the real impact on it development and consolidation was the discovery of oil occurred on December 13, 1907. The small social space of Comodoro multiplied. This event was of such magnitude that led to the creation of Yacimientos Petrolíferos Fiscales (YPF) in 1922, and the characteristics of a large oil camp were significant with the passage of time. 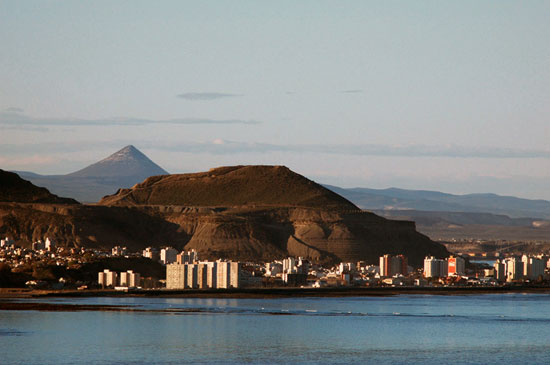 View of the city and the Mout Chenque from the Atlantic Ocean. Photo courtesy of Agencia Comodoro Turismo.

Those who inhabit this land say that the climate has changed and the truth is that these statements come from the good sense and are corroborated with reports of science. Winters are mild with occasional snow and in summer you can enjoy the beaches, as westerly winds are dry but warm.

It has 134,000 inhabitants and as such, is the urban and service center of greatest impact on the region. Comodoro suffered the shocks of the privatization of YPF (Fiscal Oilfields), and while going through a period of economic recession, citizen activity remains one of its characteristics. It has a Mechanical Engineering - high quality metallurgical tradition from its oil. Characteristic rockers, as the oil pumping equipment is known, trim the adjacent landscape like bird beaks sink without pause on the depth of the earth.

In this landscape we add the silent windmills. Sixteen friendly clean energy-generating machines that are located in the hilltop Arenales. The 10 MW wind farm has become the largest in Latin America.

You can also say that Comodoro is an enclave in Patagonia, tanned by the wind, covered by the mythical Mount Chenque and the neighboring seaside resort and residential Rada Tilly. It has an university, is the service center and point of reference in Central Patagonia.

The young population of the city is very important. Suffice to say that almost 38% of the total population consists of children up to 15 years (45,000 people).