The strikes of 1921, a testimony See map

Strikes in Puerto Deseado area between 1917 and 1921 were part of a much broader movement that affected the whole of province of Santa Cruz.

While there were other strikes earlier in which demanding better living conditions and wages, the new claims had, in addition to their salary edge, a strong ideological background: leaders advocated socialist and anarchist ideas. Perhaps because of this repression was stronger than in the past and the result was hundreds of laborers shot. 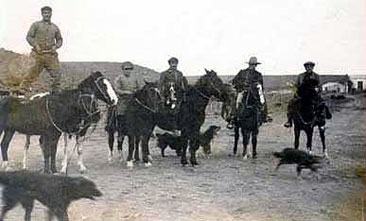 Photo of the strikers. Hundreds were shot during the strike of '21.

María Concepción Sierra, a former citizen of the town, learned of the strike when she worked at the farm Petersen, about 100 kilometers west of Fitz Roy. She lived in a house of stones and plates in the middle of the plateau of Santa Cruz, with her husband Miguel Ramos and her two sons, Miguel and Marcelo.

In a note to Patagonia.com.ar she told us that

"The strike of '21 was brave, they killed many people in the field ... we were very frightened because we were between two fires ... they have told us that the strikers were already coming from Las Heras, that they had looted La Anónima of Perito Moreno and herded the people of the rooms aimlessly ...

They took the horses and pawns ... Well, I was sick, half anemic and a night, at about three o'clock they knocked my door ... Dad and I were and my two kids, the littlest was crying, I felt death between teeth ... The hitting was Don Leoncio, a Spanish that came to tell us that the strikers were coming, they were taking people and burning houses and so then he would take their children to the basement of the station because they were not going to find them there ... my father grabbed the quillango and went to hide in the canyons and I was alone with my two children ... 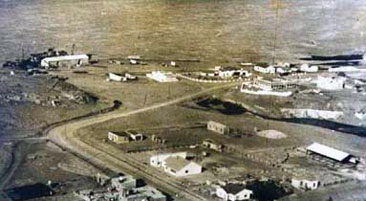 I spent the night sitting without a wink of sleep and in the early morning I climbed a hill to see if I could  see something, and nothing, not a flying bird ... when I return home I was waiting for Don Juan, the manager of the farm and he asked me "What?" I told him and he, that was scared even of flies, looked desperate at me, then I asked him to take me a next farm, to Brigida, not to be alone ... he took me and stayed with us ... every so often he would go out to watch and turned around scared, he saw a tree and thought it was a rider, he grabbed a shock barbarian ... and then spent eight days with no news ...

We later learned that the gendarmerie came in a very fast small boats and ... gendarmes were like 200 or more ... strikers had looted La Anónima of Truncado and what they could not carry, they split it between the people ... Meanwhile the police camped in the field of an Italian and ate all the sheeps ... yes, they found a pawn, to the slaughterhouses, as with anyone who was not known ... they killed many people, the strikers and gendarmes, who was on horseback, PUM, PUM ... then all was quiet and we keep doing the usual life in the farm ...".