For a couple of years, athletes from around the country attend Puerto Deseado to participate in the two disciplines that are made in the ria Deseado. Between late January and early February are held on the Cross to the Ria and the Descent of the Ria Deseado.

In the first activity, called "Cruce de la Ría a nado", athletes depart from the Yacht Club "Capitán Oneto" of the city and swim a distance of 400 meters with constant currents, where swimmers develop tests in pairs and by relays of no more than 100 meters, having to do twice each member. There is also a new test for children and one for adults who are getting started in swimming. 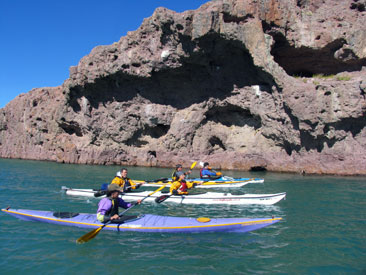 Lowering the Ria in Puerto Deseado.

Along the way the competitors have the support of Argentinean Coast Guard personnel, the local district hospital, local lifeguard, the Foundation "Conociendo Nuestra Casa" and boats and individual kayaks.

This event was first held on March 7, 2007, when a group of people with experience in swimming in swimming pools were tested in open water, having done a previous study of currents, tides, temperatures, precautions and all security measures.

The Ría Deseado is also the protagonist of the "Bajada de la Ria Deseado", an important event organized by the Yacht Club "Capitán Oneto", which allow boats such as kayaks or canoes only for anyone interested rower over 16 years.

This journey is divided into two stages: the first 20 km when the tide is in favor and the second 15 km also with tide in favor. Between one phase and the other, competitors do night in Caleta Tiburón, so they must have items for camping and ranch. 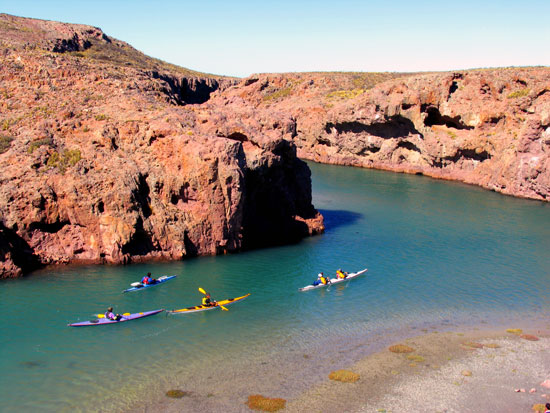 The competence of the Bajada can be done in kayaks or canoes.


The first stage starts from Paso Marsicano, it goes through the viewpoint of Darwin (a rock formation) and it is made an intermediate stop for a snack, for then get to Caleta Tiburón. By the second day the participants leave Caleta Zar and travel by waters of the ria up to the Yacht Club, where the delivery of the certificates is done.

From the organization of the event (the Club Oneto) is provided to all athletes food for lunch and dinner and overnight. It is also remember that this activity is totally free, no registration fee, and has rowers from different locations such as Río Gallegos, Pico Truncado, Comodoro Rivadavia, Caleta Olivia, the local people and also from Buenos Aires and Cochrane, in the southern Chile. 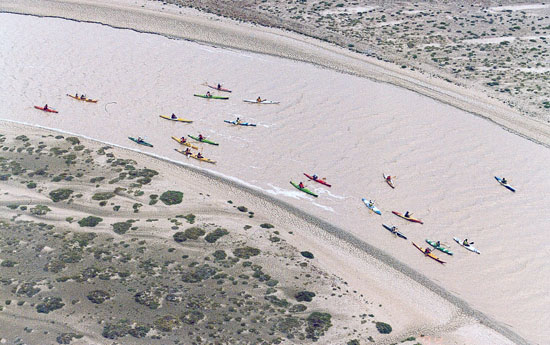 In total it is a journey of 35 kilometers in two stages.
Share