Caleta Olivia is located 50 km from the border with Chubut, on National Route No 3 and is configured as the gateway to the province of Santa Cruz. It is the second location for its turnover and oil since 1944, when the well 0.12, in the vicinity of Cañadón Seco, revealed a rich napa oil. Its main attraction is a fantastic journey along the coast of the Golfo San Jorge with cliffs and sandy beaches. 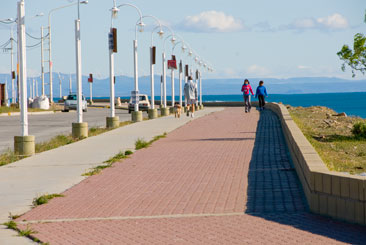 The coast of Caleta Olivia, ideal for walking. Photo courtesy of A. Patrian.

These population centers are faithful exponents of Patagonian development driven by oil and gas resources in the basin of the Gulf of San Jorge. In addition, during the month of January, Pico Truncado becomes the seat of the Southern National Folklore Festival.

Puerto Deseado is a wonderful town with harbor and cliffs, history and landscape. Quintessential tourist resources are reservs at Cabo Blanco, Ria Deseado, Bahía Laura and Isla Pingüino, home to the most diverse marine birds, among which include cormorants, penguins, Magellanic and Rockhopper, Antarctic pigeons and oystercatchers. Attractive complement its two major annual events: the pilgrimage to the Grotto of Lourdes and the shark fishing contest. 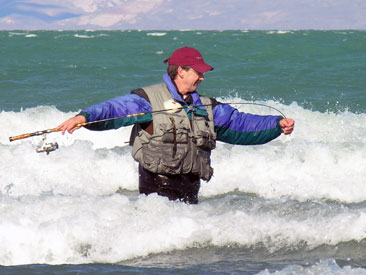 Fertile town in the center of the province. At 75 km is Lake Cardiel that is easily accessible by National Route No. 40, which is considered the fish richest lacustrine mirror of the province for its great concentration of salmonids.

Puerto San Julian is located in a picturesque bay between Cabo Curioso (with excellent beaches) and Punta Desengaño. You can take boat rides to the islands Cormoran and Justicia, which are populated by very varied marine bird species. It was declared a historic landmark, evoking the celebration of the first Low Mass in Argentine, on the occasion of the landing of Magellan and his crew in 1520.

By Undersecretary of Tourism Santa Cruz

Easter ir Chubut Chubut is a city that offers mountains, plateau and coast with varied landscapes and attractions to visit. In Easter wait for tourists tempting them with offers like visit Los Alerces National Park, see dolphins in Playa Unión, get close to the penguins at Punta Tombo, among many other things.
Touring the colors, the flavors and history of the area From the picturesque Trevelín, with its teahouses, passing through the Futaleufu dam, Los Alerces National Park, and Esquel, the mountain range has places worth knowing. Also, a look at the history of the place.
A tour of the province of Chubut The province of Chubut has three distinct landscapes: the mountains to the west, the coast to the east and central plateau. Also in the lower part of the Chubut River, which rises in the mountains, it is form a fertile valley.
Know the Patagonia in an incredible journey on Route 40 3A journey of nearly 2700 km (half gravel and half asphalt) to discover the vastness of Patagonia Argentina following a road of mythological fame worldwide.
North-Andean Circuit The north of the Santa Cruz Mountains offers diverse landscapes and opportunities to immerse yourself in nature. Can be found Jaramillo Petrified Forest, the largest cherry production of the country in Los Antiguos and the town of Perito Moreno among other attractions.
Cueva de las Manos: a Cultural Heritage of Humanity The rock art that keeps the Cueva de las Manos, the oldest known of South American peoples led UNESCO to declare it Cultural Heritage of Humanity. The whole surrounding area is a rich archaeological and paleontological site.
South-Coastal Circuit The provincial capital, wildlife reserves and ideal places for fishing and other outdoor activities are the options presented in the southern province of Santa Cruz.
South-Andean Circuit The southwestern province of Santa Cruz is one of the main destinations in Argentina, finding there the glacier Perito Moreno. You can also visit El Chaltén with endless possibilities for trekking and Río Turbio with pronvicial center of winter sports, among other attractions.
Proposals for Easter We offer six destinations to spend a mini vacation at Easter. From the mountains, beaches to trips on the Trcohita.
When travel by Patagonian routes The thing to consider before heading to the Patagonian routes.
See all Articles