Surrounded just by the constant murmur of the Patagonian wind, open the Pinturas River Canyon. There, among the folds of its high walls, rock art is found in the Cueva de las Manos, where people from 9,000 years ago sealed their art and their life testimony.

Its fame is not for nothing. Those hands, guanacos and geometric patterns in the stone of the cave are the oldest expression of South American peoples are aware. Unesco understood this when in 1999 it was appointed Cultural Heritage of Humanity. 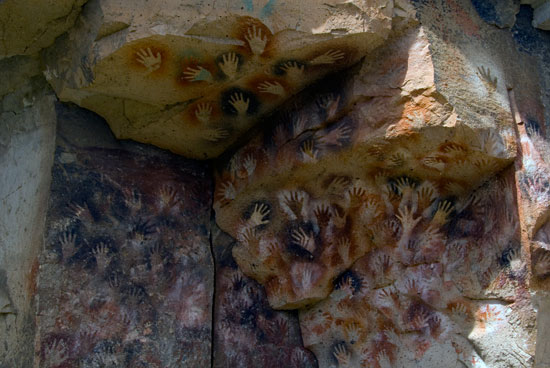 The caves saved works done by tehuelches and their ancestors. Photo courtesy of A. Patrian.

Its location, alone, in the middle of the desert northwest of Santa Cruz, lets kept intact. The nearest town, Perito Moreno, is 163 kilometers away. And beyond, and near the mountain range, there is Los Antiguos, which was the resting place of the elders of the tribes that disappeared.

This whole area and not just the cave, including the Perito Moreno National Park, is a rich archaeological and paleontological site. The valleys, canyons, lakes and rivers that make it up jealously shelter paintings and different types of archaeological sites in which men walked 14,000 years before Christ. And between the weeds there are fossils that testify the existence of a sea in this region long before man inhabited. In fact, the town of Perito Moreno is called the Archaeological Capital of the Province of Santa Cruz. 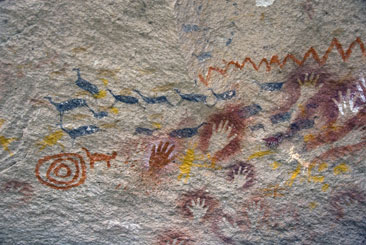 You can find any kind of images in the walls of the caves. Photo courtesy of A. Patrian.

Caves of Pinturas river saved works done by the Indians and their ancestors tehuelches. Its age is 9300 years, according to research. There are, besides negative handprints, pictures of guanacos, geometric patterns, clusters of lines, dots and solar figure. The largest congregation is in the actual cave, Cueva de las Manos, which is 24 meters deep, 15 meters wide at the entrance and about 10 meters high up to the beginning of the visor.

On both sides of the entrance, there are small spaces in the light, but partially protected by the projection of the Visors. The eaves are formed by protrusions that protect the paintings from the wind and sun.

It includes three levels of culture, with an estimated range from 7370 BC to 1000 AD. Although this assessment is relative, since the realization of the paintings may have taken place in short time, in an almost synchronous or far apart in time.

The color of the negative imprints of hands depended on obtaining raw materials close to each site, but most are in red (hematite), white (limestone), black (manganese or charcoal) and yellow (limonite or yellow ocher).

Easter ir Chubut Chubut is a city that offers mountains, plateau and coast with varied landscapes and attractions to visit. In Easter wait for tourists tempting them with offers like visit Los Alerces National Park, see dolphins in Playa Unión, get close to the penguins at Punta Tombo, among many other things.
Touring the colors, the flavors and history of the area From the picturesque Trevelín, with its teahouses, passing through the Futaleufu dam, Los Alerces National Park, and Esquel, the mountain range has places worth knowing. Also, a look at the history of the place.
A tour of the province of Chubut The province of Chubut has three distinct landscapes: the mountains to the west, the coast to the east and central plateau. Also in the lower part of the Chubut River, which rises in the mountains, it is form a fertile valley.
Know the Patagonia in an incredible journey on Route 40 3A journey of nearly 2700 km (half gravel and half asphalt) to discover the vastness of Patagonia Argentina following a road of mythological fame worldwide.
North-coast circuit In this note we present the locations of the northeastern region of the province, those on the north coast of Santa Cruz, as Pico Truncado, Caleta Olivia and Puerto Deseado.
North-Andean Circuit The north of the Santa Cruz Mountains offers diverse landscapes and opportunities to immerse yourself in nature. Can be found Jaramillo Petrified Forest, the largest cherry production of the country in Los Antiguos and the town of Perito Moreno among other attractions.
South-Coastal Circuit The provincial capital, wildlife reserves and ideal places for fishing and other outdoor activities are the options presented in the southern province of Santa Cruz.
South-Andean Circuit The southwestern province of Santa Cruz is one of the main destinations in Argentina, finding there the glacier Perito Moreno. You can also visit El Chaltén with endless possibilities for trekking and Río Turbio with pronvicial center of winter sports, among other attractions.
Proposals for Easter We offer six destinations to spend a mini vacation at Easter. From the mountains, beaches to trips on the Trcohita.
When travel by Patagonian routes The thing to consider before heading to the Patagonian routes.
See all Articles