The capital of the province of Santa Cruz is located on the mouth of the river of same name and with a population of 80,000 inhabitants, Río Gallegos becomes the tourist center par excellence scale. An extensive coastal avenue, visits to regional museums, the cathedral built by the early twentieth century Aboriginal people or the former coal port make the delight of tourists. 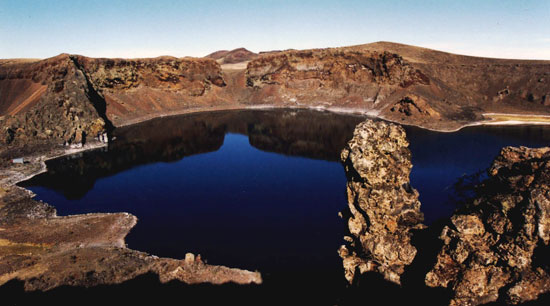 It is located 60 km south from Río Gallegos. There you can see at first sight a mysterious landscape of volcanic features, crowned by the presence of a highly colored lake, located in the crater of an extinct volcano.

In the area of ​​influence of Río Gallegos, 134 km south of this area, you may visit the Cape Vírgenes fauna reserve. There 80 000 pairs of Magellanic penguins nest every year from October to March. The visitor center and a self-guided interpretive trail illustrate the habitat and marine biology of this very special animal. 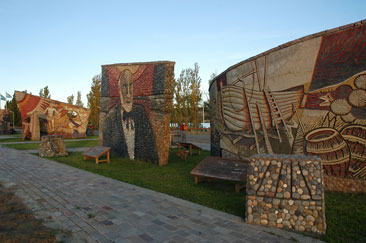 Murals in Cmte. Piedrabuena. Photo courtesy of Ministry of Tourism of the locality.

Town situated on the north bank of Santa Cruz river, a few kilometers from its mouth at the sea. Very close to it is sighted the historic home of Commander Luis Piedrabuena, where he defended with determination and unshakable the national sovereignty. Its main attraction is the Isla Pavón, ideal for camping and excellent fishing.

Located on the south bank of Santa Cruz river, almost at its mouth in the Atlantic Ocean, it was the capital of the territory until 1887, the year in which the then governor Lista moved the seat of government to Río Gallegos. It has historical and wildlife tourist attractions.

It is the first Coastal National Park and is located 54 km from Puerto Santa Cruz. A bay surrounded by high cliffs, natural colony of sea lions and Magellanic penguins, makes it the ideal place for birdwatching.

Easter ir Chubut Chubut is a city that offers mountains, plateau and coast with varied landscapes and attractions to visit. In Easter wait for tourists tempting them with offers like visit Los Alerces National Park, see dolphins in Playa Unión, get close to the penguins at Punta Tombo, among many other things.
Touring the colors, the flavors and history of the area From the picturesque Trevelín, with its teahouses, passing through the Futaleufu dam, Los Alerces National Park, and Esquel, the mountain range has places worth knowing. Also, a look at the history of the place.
A tour of the province of Chubut The province of Chubut has three distinct landscapes: the mountains to the west, the coast to the east and central plateau. Also in the lower part of the Chubut River, which rises in the mountains, it is form a fertile valley.
Know the Patagonia in an incredible journey on Route 40 3A journey of nearly 2700 km (half gravel and half asphalt) to discover the vastness of Patagonia Argentina following a road of mythological fame worldwide.
North-coast circuit In this note we present the locations of the northeastern region of the province, those on the north coast of Santa Cruz, as Pico Truncado, Caleta Olivia and Puerto Deseado.
North-Andean Circuit The north of the Santa Cruz Mountains offers diverse landscapes and opportunities to immerse yourself in nature. Can be found Jaramillo Petrified Forest, the largest cherry production of the country in Los Antiguos and the town of Perito Moreno among other attractions.
Cueva de las Manos: a Cultural Heritage of Humanity The rock art that keeps the Cueva de las Manos, the oldest known of South American peoples led UNESCO to declare it Cultural Heritage of Humanity. The whole surrounding area is a rich archaeological and paleontological site.
South-Andean Circuit The southwestern province of Santa Cruz is one of the main destinations in Argentina, finding there the glacier Perito Moreno. You can also visit El Chaltén with endless possibilities for trekking and Río Turbio with pronvicial center of winter sports, among other attractions.
Proposals for Easter We offer six destinations to spend a mini vacation at Easter. From the mountains, beaches to trips on the Trcohita.
When travel by Patagonian routes The thing to consider before heading to the Patagonian routes.
See all Articles