Places to go in the South Line See map

The populations of the southern line are marked by a cultural identity that has managed to respect their first aboriginal settlers, taking the elements that had brought the European immigrant and especially the one from the Middle East, one of the strongest communities in the region.

In its vast territory, mixed shrub steppe and scrub environments, resulting in beautiful landscapes full of stories, which are held by men and worn by time.

Getting to the region? 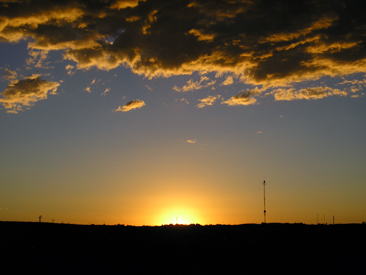 The sunset in a field of the south line. Photo courtesy of Luis Cayuqueo.

From Buenos Aires there are daily flights to San Carlos de Bariloche and Viedma. Then you have to take the National Route 23, which crosses the entire Patagonian steppe, from the Andes to the Atlantic Ocean. For it you can make the journey by car or bus. Another option is to take the Patagonian Train, which makes a frequent travel between Viedma and Bariloche at the same time that transports us to the regional history, the birth and progress of the towns of the south line, making a unique and fantastic journey.

Those interested in knowing how is the economic activity that characterizes this region, sheep and goats, can do it and live it today as it was more than fifty years ago, as it has survived intact over time. This is a live experience "Patagonia Real", the lifestyle of its inhabitants.

Visitors can experience traditional camp activities, such as signs, pens, vaccinations, shearing, taste the gastronomy of "inland" and to stay in enabled rural facilities. They will enjoy the warmth of the people, who will delight in their exciting stories.

This vast plateau of basalt, Precambrian origin, thousands of years ago became an island when the Atlantic Ocean entered the continent. In this way, it was established in a natural refuge for animal and plant species, which having been isolated for so long, today they are endemic species, unique in the world.

On the site are cave paintings and petroglyphs in caves and valleys that mark the human presence in the area of ​​several millennia ago. Moreover, among the 25,000 square-km area that has few people live today.

This region was inhabited at first by tehuelches and mapuches, indigenous peoples with an ancient tradition. Then came the European immigrants and especially Arab communities, who chose to stay in the southern of the province of Río Negro.

Currently, this melting pot of different cultures are the foundation of the people, who through the food and crafts show their identity and tradition. Among these products you can find their coats, scarves and socks that are made based on hair of angora goats and rabbits, taken from the farms located in the region, as well as tissues made on Mapuche weaving wool, which are of excellent quality and highly recognized. 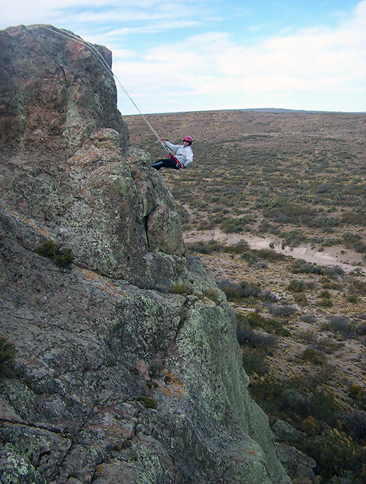 Abseiling at the foot of the Plateau Somuncurá. Photo courtesy of Eduardo Perez.

Another feature of the region is the excellent quality of the sheep and goat meat, which have a mild flavor and characteristic attributed mainly to pasture, differing from other areas of Patagonia. When making roast lamb and goat, the local uses piquillín wood, creosote bush or cow wood twigs, which give aroma and flavor.

For its part, the Arab tradition is seen in foods such as hummus, tabbouleh, cap and laben and as snack it can not miss the Turkish anise.

Thanks to the different landforms and landscapes that form the steppe, the Patagonian plateau, the mountain and the elevations of the pre Cordillera, this area is an ideal setting for the practice of activities in contact with nature, such as:

These activities are conducted in landscapes, trails and back roads, where the effort to move, by the ever-presence of the Patagonian wind has as prize to get incredible panoramic views and to learn about the culture, flora, fauna and geography of the place.

For those who are passionate about discovering the traces of our past, the southern region is an ideal scenario, finding archaeological remains of indigenous cultures that inhabited this area, such as rock art, stone and pottery items.

These signs can be found in museums in the region and outdoors too, where you can watch this paleontological wealth of Rio Negro territory. You will know impressive petrified forests, rock paintings in caves, many findings of primitive cultures, skeletal remains of prehistoric reptiles preserved in excellent condition and eroded land formations that show the geological past.

Easter ir Chubut Chubut is a city that offers mountains, plateau and coast with varied landscapes and attractions to visit. In Easter wait for tourists tempting them with offers like visit Los Alerces National Park, see dolphins in Playa Unión, get close to the penguins at Punta Tombo, among many other things.
Touring the colors, the flavors and history of the area From the picturesque Trevelín, with its teahouses, passing through the Futaleufu dam, Los Alerces National Park, and Esquel, the mountain range has places worth knowing. Also, a look at the history of the place.
A tour of the province of Chubut The province of Chubut has three distinct landscapes: the mountains to the west, the coast to the east and central plateau. Also in the lower part of the Chubut River, which rises in the mountains, it is form a fertile valley.
Know the Patagonia in an incredible journey on Route 40 3A journey of nearly 2700 km (half gravel and half asphalt) to discover the vastness of Patagonia Argentina following a road of mythological fame worldwide.
North-coast circuit In this note we present the locations of the northeastern region of the province, those on the north coast of Santa Cruz, as Pico Truncado, Caleta Olivia and Puerto Deseado.
North-Andean Circuit The north of the Santa Cruz Mountains offers diverse landscapes and opportunities to immerse yourself in nature. Can be found Jaramillo Petrified Forest, the largest cherry production of the country in Los Antiguos and the town of Perito Moreno among other attractions.
Cueva de las Manos: a Cultural Heritage of Humanity The rock art that keeps the Cueva de las Manos, the oldest known of South American peoples led UNESCO to declare it Cultural Heritage of Humanity. The whole surrounding area is a rich archaeological and paleontological site.
South-Coastal Circuit The provincial capital, wildlife reserves and ideal places for fishing and other outdoor activities are the options presented in the southern province of Santa Cruz.
South-Andean Circuit The southwestern province of Santa Cruz is one of the main destinations in Argentina, finding there the glacier Perito Moreno. You can also visit El Chaltén with endless possibilities for trekking and Río Turbio with pronvicial center of winter sports, among other attractions.
Proposals for Easter We offer six destinations to spend a mini vacation at Easter. From the mountains, beaches to trips on the Trcohita.
See all Articles