This small creature of the Cretaceous, found in the formations of fences surrounding the city of Neuquén, was originally described as a possibly scavenger carnivorous dinosaur.

It has recently been reclassified and placed it directly as an avian dinosaurs, more precisely the copy gives name to the family Alvarezsauridae that among other animals includes Patagonikus Puertay (another dino of Patagonia) and Mononychus Olecranus, an unusual and remote bird of Mongolia. 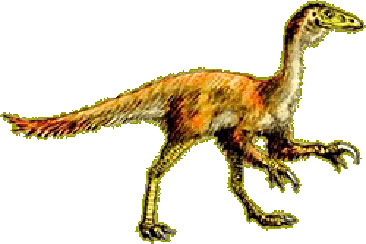 Alvarezsauridae's family is also closely related to the oldest and most famous bird known, the archaepteryx, whose fossils were found globally widespread in Germany. Alraezsaurus was mistaken for a dinosaur and not aviano because its skeleton was much resembled to theropods (carnivores) as well as to primitive birds.

It was a running bird whose arms were completely atrophied, thou as well as the Unenlagia comahuensis at its tip was only a kind of finger with a sharp claw.

The Alvarezsaurus had one meter long and just 70 centimeters tall. It is estimated that he did not eat any meat. Scientists found only forty percent of the bones of this animal which complicated the investigation and determination of all its features.

Bones and a natural size replica are exhibited in the museum of the National University of Comahue. The curious thing about this finding is that it was few meters from where it was later studied.

Nearby, in the same strata of the Cretaceous period, it were also found fossils of a Notosuchus, a primitive crocodile. Only part of the land has been preserved and properly studied, following the inevitable advance of the capital city of Neuquén.

Patagonia is a rich field for Paleontology For more than 100 million years ago dinosaurs roamed the earth. Patagonia is one of the most rich in traces of their existence.
Amargasaurus Casuei The Amargasaurus Cazuei was a sauropod (plant-eating animal) that had the peculiarity of spines on the back and head, which protected him from attack by large predators that doubled in size.
Andesaurious Delgadoi The Andesaurious Delgadoi or "lizard of the Andes" is a kind of titanosaur (herbivore) found in the area of ​​Comahue. Its fossils are on display in the museum of the National University of Comahue.
Argentinosaurus Huinculensis The Argentinosaurus came to measure up to 40 meters long and lived about 65 million years ago (Upper Cretaceous) in the area of Plaza Huincul and Cutral Co, in the province of Neuquén.
Carnotaurus Sastrei El Toro Carnivore (Carnotaurus) was one of the fearsome predators of the Cretaceous period. Its fossils are on display at the Museum of Natural Sciences in Buenos Aires and at the Museum Egidio Feruglio of Trelew.
Gigantosaurus Carolini The Carolini Giganotosaurus is the largest carnivorous dinosaur in the world. The bones of the dinosaur, and a replica made ​​of resin size, are displayed in the municipal museum of Villa El Chocón.
Rebachisaurus Tessonei The Rebachisaurus Tessonei was a sauropod that walked on four legs and had a long neck ranged between 15 and 17 meters and its weight is estimated between 18 and 20 tonnes.
Unenlagia Comahuensis It is the ancestor of the oldest flying bird known. Its name (in Mapuche language) means something like "half bird of the Comahue" and its fossils were found by paleontologist Fernando Novas in the place Portezuelo, on the border between Cutral Có and Zapala.
See all Articles