El Toro Carnivore (Carnotaurus) was one of the fearsome predators of the Cretaceous period. The bones of this animal were located in the fields of a rancher named Sastre who ended up giving his last name to this creature that walked its ten meters long by what is now known as the Pampa de Gastre, in the province of Chubut.

The estimated age of this animal is 95 million years, dating from the Early Cretaceous that located near the Giganotosaurus Carolinii, not to mention about a thousand kilometerss of distance separating the two findings. 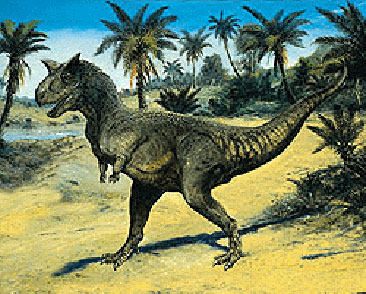 The most striking aspect of this carnivorous bull are its spectacular horns that served to attack its victims and rivals. Its extremely small arms had an advanced state of atrophy and were-even-smaller than the ones of the Tyrannosaurus Rex. It is estimated that his power strenght was sustained in a powerful jaw with sharp teeth and in his horns.

The snout of the Carnotaurus had ridges and prominences suggesting that his skin was rough and thick. It is believed that the roughness of the dorsal area of ​​the head served as a protection to the animal each time it introduced its nose into the bodies of their victims. The animal, found in the place Bajada Moreno, fed especially of sauropods related to the Chubutisaurus, the Limaysaurus and the Andesaurus.

Carnotaurus fossils are on display at the Museum of Natural Sciences in Buenos Aires and at the Museum Egidio Feruglio of Trelew.

In January 1999, a team led by paleontologists Rodolfo Coria (Carmen Funes Museum in Plaza Huincul), and Luis Chiappe (Museum of Los Angeles), found in the area surrounding the volcano Auca Mahuida (about 120 kilometers from the city Neuquén) the bones of what would later be presented as the first Carnotaurus of the Upper Valley of Negro River.

Subsequent studies suggest that Auca Mahuida creature -a carnivore that in life measured eight meters long- is of a different species but with many similarities to the Carnotaurus. Of the dinosaur of Neuquén were found 90 percent of the bones, which in these days are been studied in the Carmen Funes Museum.

The discovery was made as part of the expedition to rescue the sauropod eggs lying near the dead volcano.

Patagonia is a rich field for Paleontology For more than 100 million years ago dinosaurs roamed the earth. Patagonia is one of the most rich in traces of their existence.
Alvaresaurios Calvoi El Alvaresaurio Calvoi is an avian dinosaur found in the walls of the city of Neuquén. Bones and a natural size replica are exhibited in the museum of the National University of Comahue.
Amargasaurus Casuei The Amargasaurus Cazuei was a sauropod (plant-eating animal) that had the peculiarity of spines on the back and head, which protected him from attack by large predators that doubled in size.
Andesaurious Delgadoi The Andesaurious Delgadoi or "lizard of the Andes" is a kind of titanosaur (herbivore) found in the area of ​​Comahue. Its fossils are on display in the museum of the National University of Comahue.
Argentinosaurus Huinculensis The Argentinosaurus came to measure up to 40 meters long and lived about 65 million years ago (Upper Cretaceous) in the area of Plaza Huincul and Cutral Co, in the province of Neuquén.
Gigantosaurus Carolini The Carolini Giganotosaurus is the largest carnivorous dinosaur in the world. The bones of the dinosaur, and a replica made ​​of resin size, are displayed in the municipal museum of Villa El Chocón.
Rebachisaurus Tessonei The Rebachisaurus Tessonei was a sauropod that walked on four legs and had a long neck ranged between 15 and 17 meters and its weight is estimated between 18 and 20 tonnes.
Unenlagia Comahuensis It is the ancestor of the oldest flying bird known. Its name (in Mapuche language) means something like "half bird of the Comahue" and its fossils were found by paleontologist Fernando Novas in the place Portezuelo, on the border between Cutral Có and Zapala.
See all Articles