Charles Darwin was an English naturalist who devoted many years of his life to research. He spent several years traveling that helped him to formulate theories and discoveries. Patagonia was one of those places he traveled and in which he discovered species and corners unseen by his eyes.

200 years ago (1799) this scientist was born, who was a before and after in scientific thought to spread the theory of evolution of species. 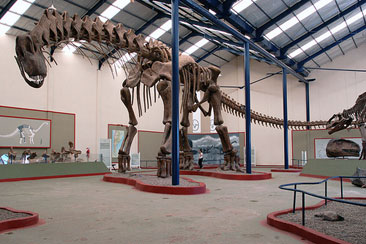 Fossil collecting gave Darwin data to formulate his theory. In the photo the Huinculensis Argentinosaurus at Plaza Huincul Musuem.

In 1831, 27 December, along with Captain Fitz Roy on the Beagle ship they set sail on an expedition that would last five years. At first the objectives of the trip were raised in relation to geology and mapping. They compilled copies and mapped the South American coast. After, Darwin would know species, collect fossils, observe animals, such as the ostrich which he observed two kinds of ostriches that have territories separate but overlapping. All these findings begin to provide data to Darwin to support his theory of evolution.

The theory of evolution of species suggests that all species of life have evolved over time from a common ancestor through a process called natural selection. Thus, new species evolve or emerge from earlier species.

Darwin proposed that environmental and genetic differences in these organisms cause changes in them and that are better adapted to their environment over millions of years.

The most used is the explanation that the man shares his genetic material with chimpanzees, an animal that has evolved over thousands of years to become what we are today.

These revolutionary ideas were criticized at the time and still today, fo the church and those who have the vision of a world in which creation was from a divine law.

Darwin died in 1882 at age 73 and was buried in London, alongside other revolutionary scientific because of his discoveries, Isaac Newton.

After his death, it have been published manuscripts of Charles Darwin such as "The Origin of Species", published 17 years later, or "Journey of a Naturalist round the world" in which you can read about the places he visited on his journey through the world.

His work was reinterpreted and his theory used to other areas of life, for better or for worse. So much so, that the theory of evolution of species was used to justify social and racial differences, where from the famous phrase "the adaptation of the fittest" justified acts of slavery or racism among men. Although Darwin had said it was "absurd to speak of an animal is greater than another".

Chubut's history Chubut is one of the most important Welsh colonies in the country. Its members came to this land long before the Spanish and Italians and established ties of solidarity with the local natives, the Indians tehuelches. Gaiman and Trevelin are the most strongly conserved Welsh traditions.
The italian and spanish inmigration in Chubut The province of Chubut was originally colonized by Welsh, but also, and like the rest of Patagonia, had a large influx of Spanish and Italian in the late nineteenth century.
The economy in the province of Chubut Chubut has one of the most important destinations in Patagonia: the Valdes Peninsula, that together with the mountanious offer builds its tourist industry. However, its economy is composed of a variety of activities: agricultural, industrial fishing, petroleum, livestock, forestry and various activities.
Short Patagonian history Short history of Patagonia. Old settlers, social relationships of domination and the formation of national territories that gave rise to the different provinces.
Neuquén: population growth and collective identity The identity of the inhabitants of Neuquén is rooted in history and is presented as an inevitable factor for the technicians who developed the Draft Neuquén 2020, who say: "greater identity to further globalization".
Society, geography and economics Its geographical location, population and thriving economy based on industrial activity are some of the pillars of the province of Tierra del Fuego, the southernmost of the country and the world.
The Aboriginals and the first Europeans in the Patagonia Several attempts at colonization passed through the province of Tierra del Fuego, the youngest of our country. Its ancient inhabitants were the Onas and Yamana aborignals and centuries after the Spanish settled.
Fueguina Economy: Gas and oil Tierra del Fuego has a gas extraction plant that supplies LPG to the country and neighboring countries such as Chile and Brazil.
Tierra del Fuego: land of extremes Tierra del Fuego is a land of extremes because as well as being located in the "end of the world" and have little communication with the environment, the cold and rain in winter make the weather extreme also.
Location and climate The Bigger Island of Tierra del Fuego has different characteristics in its climate, landform and vegetation that can divide into three ecological zones: Magellan steppe, ecotone and mountain ranges.
See all Articles