The colonization of the world's southernmost region dating from the late nineteenth century and its cities, Ushuaia and Río Grande, outlined its growth penetrated the last century. 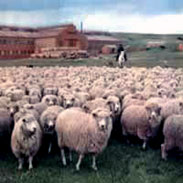 The sheep breeding is one of the main economic activities of the province.

Their varied natural resources, wood, fishing, mining, oil, tourism and its geopolitical location that limits the conjunction of the Atlantic and Pacific oceans are important conditions that allow foresee that Tierra del Fuego is called to be an important pole of economic development of the Southern region.

Its population responds to the colonizing profile of hard working and trained people in various tasks among industrial activity is highlighted with a clear adaptation to the various technological processes.

Economic infrastructure (roads, ports, energy) meet the requirements of any major undertaking. There are a number of important magnitude works in progress, as is the Port of Río Grande, the paving of the main route linking the Ushuaia-Río Grande axis, the installation of a distillery for the production of naphtha, and so on.

Various tax incentives are intended to facilitate investment, which necessarily requires the young province. Domestic economic activity is exempt from national taxes and industrial activity for export to the national mainland or foreign countries is protected by a special highly advantageous.

All the conditions allow viewing a province with a portentous future with great potential for investment projects that can be harmonized and the need for genuine social growth that yearn who live there today.

Chubut's history Chubut is one of the most important Welsh colonies in the country. Its members came to this land long before the Spanish and Italians and established ties of solidarity with the local natives, the Indians tehuelches. Gaiman and Trevelin are the most strongly conserved Welsh traditions.
The italian and spanish inmigration in Chubut The province of Chubut was originally colonized by Welsh, but also, and like the rest of Patagonia, had a large influx of Spanish and Italian in the late nineteenth century.
The economy in the province of Chubut Chubut has one of the most important destinations in Patagonia: the Valdes Peninsula, that together with the mountanious offer builds its tourist industry. However, its economy is composed of a variety of activities: agricultural, industrial fishing, petroleum, livestock, forestry and various activities.
Short Patagonian history Short history of Patagonia. Old settlers, social relationships of domination and the formation of national territories that gave rise to the different provinces.
Neuquén: population growth and collective identity The identity of the inhabitants of Neuquén is rooted in history and is presented as an inevitable factor for the technicians who developed the Draft Neuquén 2020, who say: "greater identity to further globalization".
Two hundred years of the birth of Charles Darwin On February 12, 2009 it were completed 200 years after the birth of Charles Darwin, a researcher who traveled the world and spent many years in Patagonia, where he discovered and knew what would later help him formulate his theories.
The Aboriginals and the first Europeans in the Patagonia Several attempts at colonization passed through the province of Tierra del Fuego, the youngest of our country. Its ancient inhabitants were the Onas and Yamana aborignals and centuries after the Spanish settled.
Fueguina Economy: Gas and oil Tierra del Fuego has a gas extraction plant that supplies LPG to the country and neighboring countries such as Chile and Brazil.
Tierra del Fuego: land of extremes Tierra del Fuego is a land of extremes because as well as being located in the "end of the world" and have little communication with the environment, the cold and rain in winter make the weather extreme also.
Location and climate The Bigger Island of Tierra del Fuego has different characteristics in its climate, landform and vegetation that can divide into three ecological zones: Magellan steppe, ecotone and mountain ranges.
See all Articles